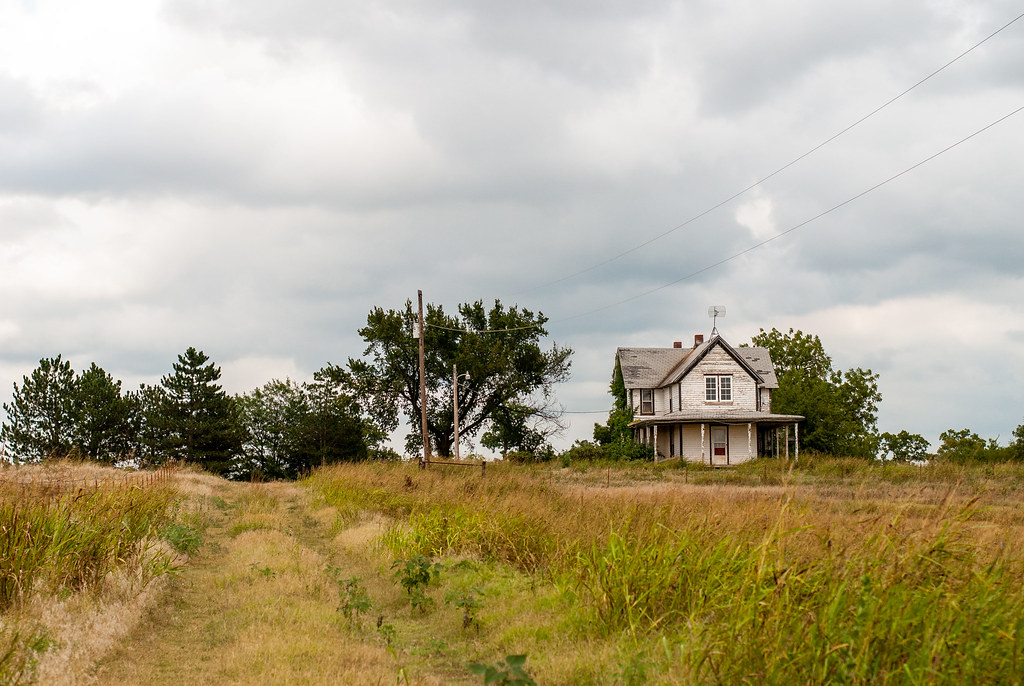 This is a picture I’ve been thinking about for a long time, and it’s the kind of shot that I just can’t go out and get any time I feel like it. Whenever we take Highway 77 north of town to get to the turnpike we pass this house, and every time we drive by I wonder about this house and what it’s doing there. When was it built? Does anyone still live in it? If so, why is it so run-down? If not, who farms the land around it? I don’t know if I will ever find the answers to these questions and in some ways I kind of like not knowing since it lets me make up my own stories about what’s really going on in inside those walls.

Despite, or perhaps because of, the fact that I don’t know anything about this house I always think it would be a compelling picture to take but since my wife and I are either at the beginning or end of a multi-hour drive to Nebraska when we go past this location I’ve never stopped to take a picture. Never, that is, until I found myself driving solo after dropping off my two nieces who stayed with us for a week this past summer. Eager to get home to my family, I spent less than a minute actually taking pictures and honestly there weren’t a whole lot of options for composing the photo since I did not want to trespass on private property. I had my D200 and 50mm lens with me at the time, which was a bit fortuitous since it meant I was shooting with roughly a 75mm equivalent lens when you take the crop factor into consideration, and that allowed me to get a closer view of the house than I would have on my D750. (Though I suppose I could have just cropped in on a D750 photo to get the same result. But still.)

I was pleasantly surprised at how the overcast sky and brown grass complemented the run-down appearance of the house, as this image would have taken on an entirely different connotation if shot in springtime, or in the early morning, or on a clear day with bright blue sky. It’s not a creepy photo despite the abandoned appearance of the house, and to me it’s more of a curiosity than anything. I shot at f/4, 1/1500 second, ISO 400 to get the exposure I was aiming for and I think it all worked out quite nicely. I’m curious what you, my readers, think of the house. Not the image per se, but the house itself. What stories come to your mind when you see this house or others like it that seem to have been long since forgotten by the passing of time?