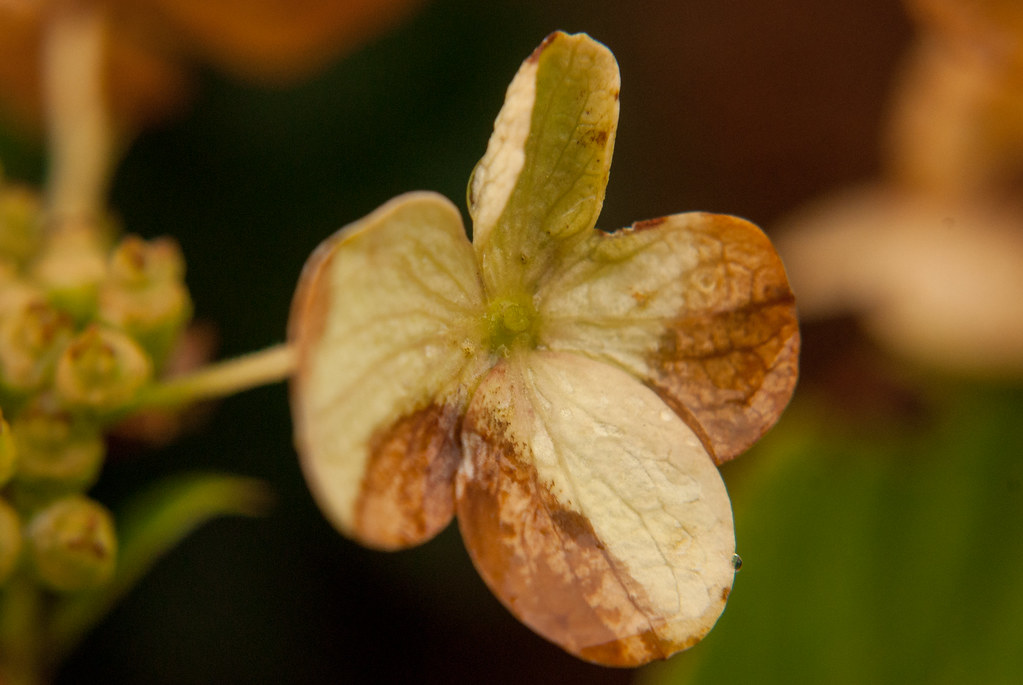 After several years of taking photos, many of which end up here on Weekly Fifty, I’m still not sure what I would say if you were to ask me what my favorite subject is to photograph. I like taking all sorts of pictures whether people, animals, flowers, landscapes, etc. Some I’d say show up more often than others and some types of pictures are better suited to a 50mm lens than others, but I think it would be safe to say that one of my favorite themes to illustrate with photography is that of transition. Obviously a picture is just a visual representation of a single moment in time, but there’s something special about taking a picture that somehow captures the ebb and flow of time as a concept that I find fascinating. I think that’s what drew me to this particular photo opportunity in the first place and it’s one reason the more I look at it the more I like it.

As per usual I don’t know what type of plant this is but I’m fairly certain it’s not a four-leaf clover. It’s just one cluster of leaves on a large bush that is on the east side of Willard Hall on the OSU campus, and even though it looks at first glance like it could have some kind of leprechaun-infused magical properties I highly doubt that is in fact the case. What drew me to this particular leaf (or leaves? I dunno) was the way it showed a subject in transition from a state of life and vibrance to wilt and decay. Not an altogether pleasant idea, but one that is compelling nonetheless.

As you might be able to guess I shot this with my close-up filters (I think it was my trusty +4 on this image) and with my creaky-but-gotta-love-it D200. The seals on that camera are all worn out so I had to be careful about not getting too much rain on it, but it only took a few seconds to get this shot so I don’t think I was in too much danger of damaging anything. I like how the rain made the leaves shine and sparkle even in the overcast light, and the tiny drop rolling down the bottom-right edge of the lower leaf adds a nice bit of motion to the image also.

Sometimes I’ll take pictures like this and then return to the same spot a day later and it always amazes me how much things can change in just a short amount of time. It’s good motivation for me to take pictures and not let my camera sit on the shelf, because I sometimes just don’t realize or have an appreciation for just how quickly time does indeed fly, how little of it we have, and how precious even simple moments like this really are.