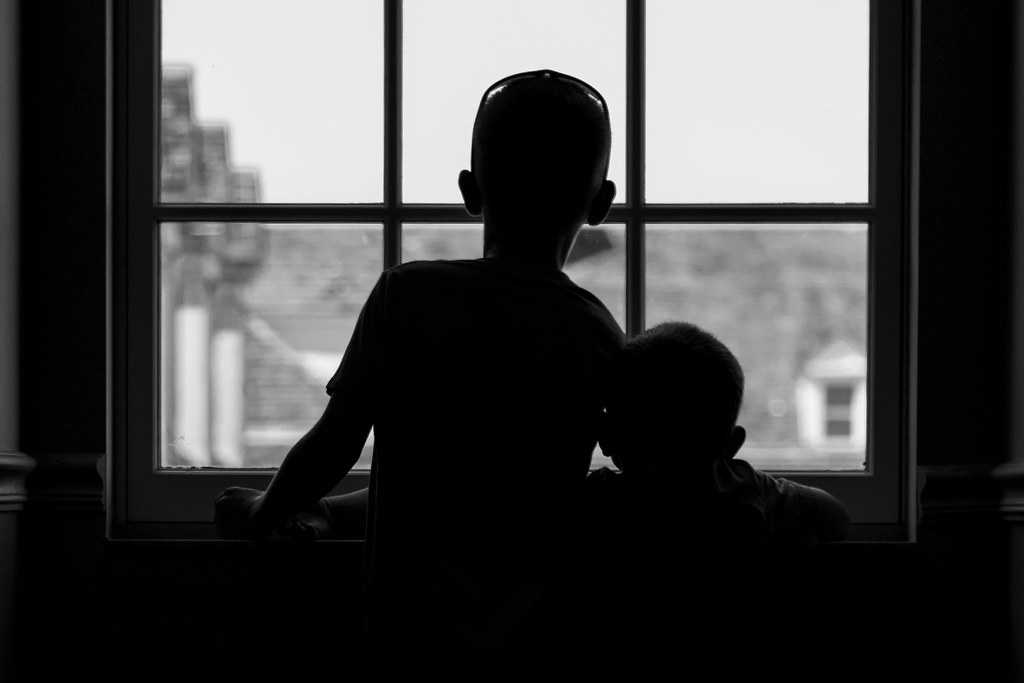 One a warm Friday morning in early September my wife brought our kids to OSU so I could watch them for an hour while she taught class. They had the day off school and we didn’t want to line up a babysitter for such a short time, so the three of us walked around campus for a little while and then found a place to sit down and have a picnic lunch with some sandwiches, apples, and a half can of peas each. While we were walking around they spotted an elevator and asked if they could ride in it to the fourth floor of the building we were in, and since I didn’t really see the harm in such a simple request we got in while they figured out who got to press the buttons. Once we arrived at the top they ran straight to the window you see here, and I quickly got out my D7100 and 50mm lens to fire off a couple shots.

I don’t normally post pictures of my kids here on Weekly Fifty because I like to keep that part of my life (and theirs) a bit more private, but this one kind of stood out to me for a few reasons. I like how it shows a physical closeness with the two boys, and even though they fight and argue as much as any pair/triad/quartet/etc. of siblings that has ever existed it’s moments like this that remind me of just how much they really do love each other. I also think it’s kind of cool how they are both clearly caught up in the same moment–not looking at one particular subject necessarily, but the action of looking out the window at the lawn below. The older one is resting his hands on the window ledge while the younger one is so short that he can barely see over it, and if you look carefully you’ll see that he’s got his arms stretched out and resting on the sill almost as if he is using them to stretch himself upwards just a bit more to see what his big brother is seeing.

I thought it was kind of a cool moment to freeze in time, and I had to act quickly to get the shot because kids tend to not stay in one place very long. I shot in Aperture Priority at f/2.8 to get the background nice and blurry and dialed in an exposure compensation of -5EV to ensure that the bright outdoors would not be blown out entirely. It worked just fine but it meant that the kids themselves were severely underexposed. Fortunately that’s exactly what I was going for so I didn’t mind :)

I originally posted the color version of this but a few days later returned to the image in Lightroom and re-edited it to be black and white. It felt more appropriate given the subjects (and subject matter) and it really served to highlight the silhouette as opposed to the color of the objects out the window. I certainly didn’t plan this shot but I’m glad I was able to take it, and it was another reminder of how important it is to have your camera with you and also know how to control it to make it do what you want to get the photos you want.