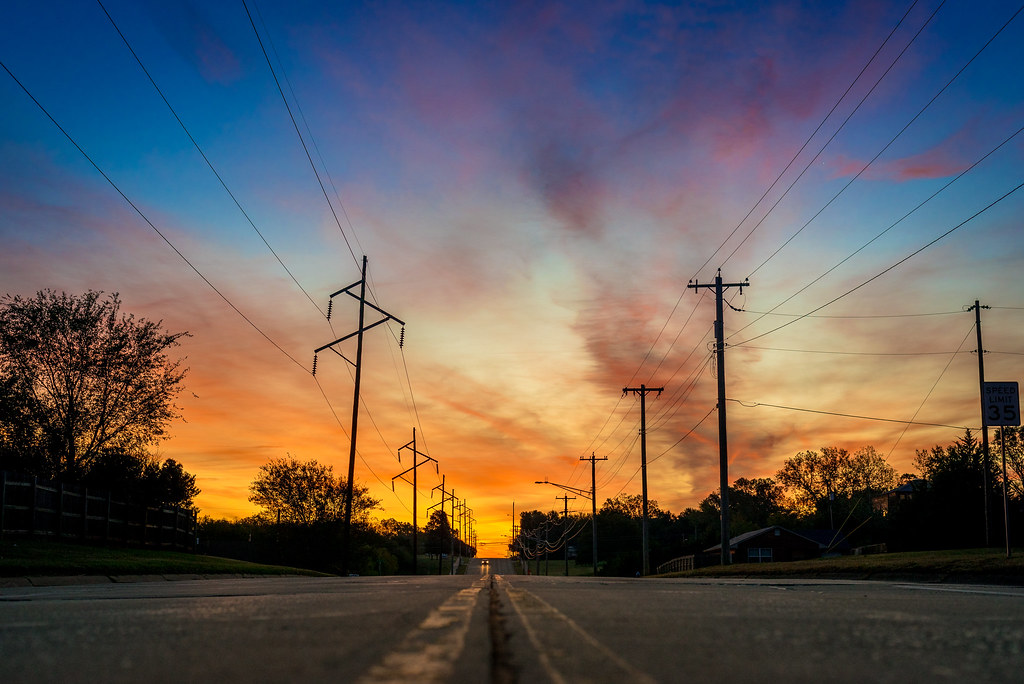 This one took some work.

I don’t mean in the physical sense, as in it was difficult to get the shot (though it was a bit tricky) but in the sense that when I sat down to edit the image I was totally lost. I had a vision in my mind of what I wanted the shot to look like, but it just wan’t quite coming together for me. A bit more on that after a while though.

For starters, I wanted to mention a bit about how I got the shot itself. I was heading to work one morning in mid October when I saw a particularly beautiful sunrise and stopped to get a photo of it from the vacant lot just south of my house. I’ve used that spot before to take sunrise pictures and while it might seem like a good place, my pictures never quite turns out exactly how I want them to. No worries though, because it’s always fun to try. A few minutes later I had turned westward and after biking a little way I looked behind me to see if it was safe to cross the street…and that’s when the sunrise went into overdrive. As soon as I got across the street I grabbed my D750 with the 50mm lens attached and waited for the traffic to clear. What I had in mind was a shot with a totally empty road with the sky glowing like the world’s largest fireworks display behind it. And I only had a few seconds to work with because sunrise scenes are exceedingly fleeting and then, as if arriving with the wave of a cosmic hand, day breaks and the magic is gone.

I waited for traffic to clear and then ran out into the middle of the road to take a couple of shots from eye level, which actually worked out fairly well. I set my aperture to f/4 with auto-ISO and a minimum shutter speed of 1/180 second. I believe I was using highlight-weighted metering too, just to make sure the sky wasn’t all blown out and knowing I could recover plenty of shadow detail in post. After a few seconds some cars showed up on the horizon so I ran back to the curb and was about to get on my bike when I noticed another potential clearing in traffic. This time I grabbed my camera, ran into the road, clicked over to Live View, flipped up the rear LCD screen so I could see the shot I was composing, set my camera on the street, and took one single picture.

I didn’t even look at the image afterwards on my camera, and figured if nothing else I at least tried to get a picture which is really all you can ask for somedays.

Later on when I loaded it into Lightroom I wasn’t even sure where to begin with my editing:

Right off the bat the first thing I saw was those two glaring headlights just below the horizon. I was specifically trying to avoid any cars in the shot, and there they were: unmistakable and unavoidable and ruining my shot. Or so I thought. But back to the editing…

I tried a number of different edits to the image but was never really happy with how it turned out. Highlight/shadow adjustments, white balance, graduated filters, brushes…I just wasn’t having any luck. I knew what I saw in person, and I knew what I wanted the image to look like in my mind, but I just couldn’t get it there in Lightroom. After a while I sent the RAW file to my friend Ryan, curious to see what he could do with the same file I had, and oh my goodness did that help. A lot.

Good gravy! Suddenly I finally had an image of what I was trying to achieve since the start, and looking at his edits gave me a whole new direction to take in Lightroom. My final version, which you see at the top of this post, isn’t quite as bright as his and there are some other choices I made to suit my own personal taste but I was floored when I saw what he was able to do and I can’t overstate how useful it was to have a second pair of creative eyes take a look at this photo.

And finally, about those headlights.

The more I looked at this image the more I appreciated that car in the distance, and now I think it’s actually the one element that ties the whole picture together. Without the car this would be just another sunrise photograph, but with it the picture tells a story and shows a sense of time and place. It’s now a picture about someone’s drive, most likely to work, in the early morning hours. His (her?) headlights are on, which helps instill a sense of time–a few minutes later and the headlights wouldn’t be needed. It’s juuuuuust below the horizon too, which maintains the clean horizontal line above the vehicle, but not yet low enough that the headlight reflections on the road no longer show up. Contrary to what I initially envisioned for the image, having this one single vehicle makes all the difference in the world.