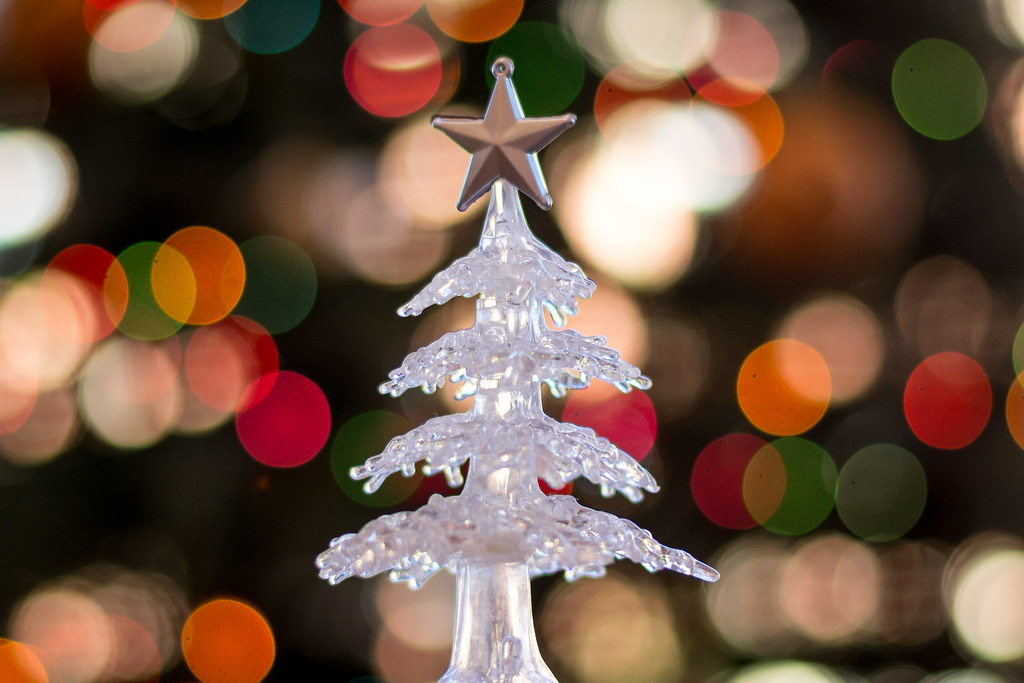 There’s nothing about this picture that isn’t artificial, and yet, I kind of like it in a weird way. To wit, the various elements include:

• Plastic USB-powered Christmas tree which was given to me by one of my students when I taught at a K-12 school in Minnesota about ten years ago. (Thanks Rachel!)
• Fake Christmas tree in the background
• Artificial lights on the tree in the background
• Even the ornament itself isn’t really what it seems. It’s designed to sit passively on a desk, but my buddy Stacy is literally holding it up in midair so I could take this shot. I cropped his hand out of the photo

So basically this image, which likely conjures up some very real thoughts and feelings about Christmas, is entirely concocted and created by me, the photographer. It’s manipulative in a way, and almost makes me a bit uncomfortable to even post it here, but I am a sucker for bokehlicious backgrounds, so there you go.

I don’t know what any of this says in grander terms, and probably nothing at all, but it did make me think about the ways in which we surround ourselves with man-made materialism at this most holy time of year when our thoughts often shift to the birth of Christ and His sacrifice on the cross. The simple act of taking this picture (f/1.8, 1/180 second, ISO 140 in case you’re interested) gave me pause because it felt like I was trying too hard to create a specific scene that should be a lot more organic and natural. If I were really trying to capture a picture that embodied the spirit of Christmas perhaps I should have looked for a crèche, or a star, or even a cross. Or maybe a picture that encapsulates innocence, self-sacrifice, or even just love.

I didn’t do any of that though, and instead chose to take a plastic tree, put it in front of another plastic tree with man-made lights stuck to it, and call it Christmas. I think the reason was because I wasn’t really trying to do anything with this picture other than to make an image that looked cool. It could have been a ham sandwich in front of a Lite Brite and it would have had the same effect, but lacking either of those I went with some more readily available implements.

And with that, here’s to a good 2017 with hopes for a fantastic 2018. For me and my family this year certainly had its share of ups and downs, challenges and rewards, and good times and bad times, but through it all I’m thankful to have had the experience and optimistic for whatever the new year brings. Thanks to all of you who continue to read Weekly Fifty, and I hope your year is ending on a good note with a lot of fantastic things yet to come.