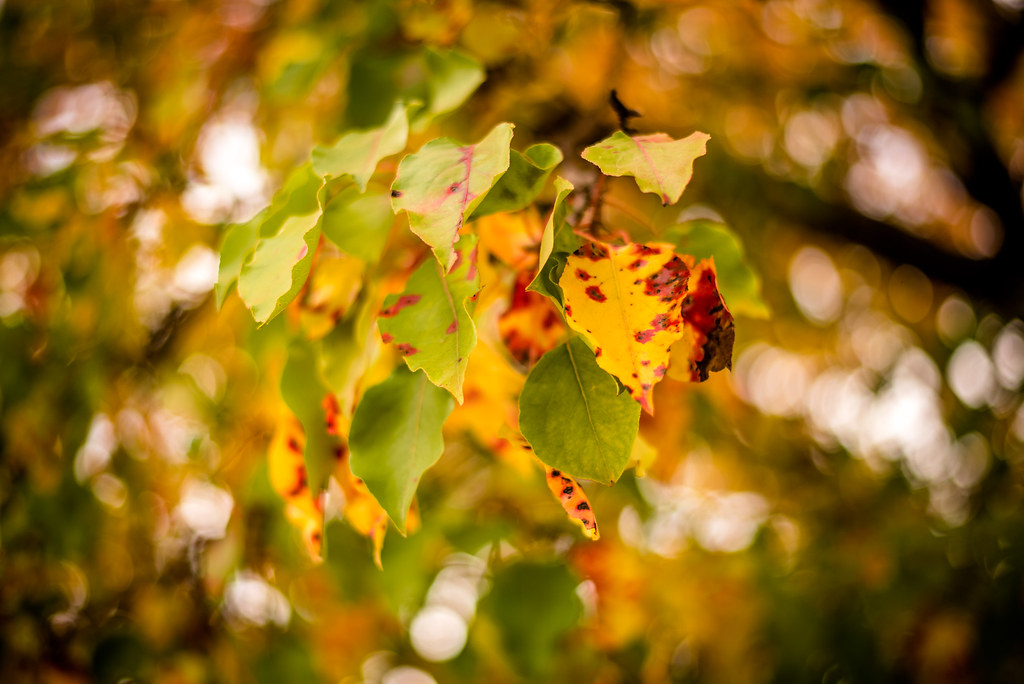 Sometimes I read posts on various internet forums (or is it foræ? fora? I dunno) wherein people bemoan the fact that there just isn’t anything interesting to photograph where they live and work. And to be honest I feel the same way at times, and I’ve been known to go for a walk, camera in hand, and return with nary a photo to show for my effort. It’s a common rut in which to be stuck with no easy way out, and that’s what I was feeling on the day I took this particular photo of some rather uninteresting leaves on what was quite a nondescript tree in the middle of the OSU campus.

I wasn’t really intending to capture this specific image, but as I walked around and noticed the vibrant colors of fall all around me I kept my eye out for a way in which I could photograph what I thought was the essence of the season. While the photo itself was kind of a happy accident, once I saw these leaves on a tree I did make some intentional compositional decisions in order to get it to look just how I wanted. Shooting with a 50mm lens doesn’t really let you get the kind of wide perspective that’s really necessary for a sweeping vista with rich colorful trees, so I took the opposite approach and tried for just a couple leaves instead. I didn’t use a close-up filter to get this shot, and instead tried to get as close as I could while also shooting wide open to get the brilliant football-shaped bokeh balls in the background.

In the end I’m not sure if this photo quite works or not. On a larger screen like a desktop monitor or even a laptop I think it’s fine, but as I was playing around with it in Lightroom I zoomed out so it would be about the size of a mobile phone screen at which point it looked more like a muddy yellow mess than a collection of fall leaves. So your interpretation of this photo might be totally different depending on how you view it, which is something that I need to keep in mind more often nowadays as it’s becoming increasingly common to view images on smaller screens.