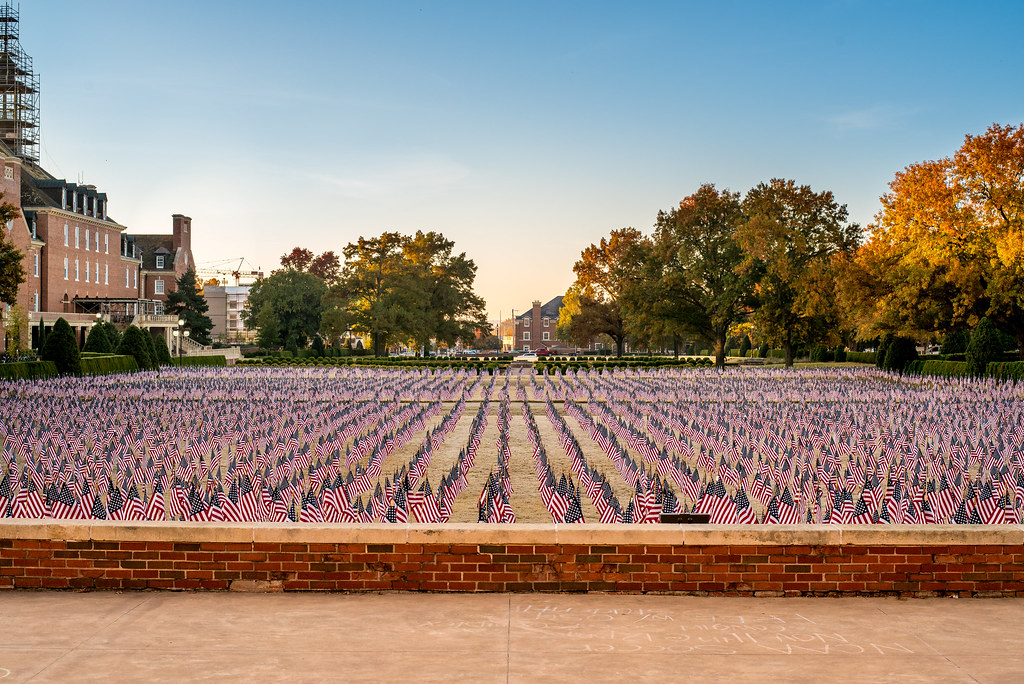 I don’t usually get too symbolic here on Weekly Fifty, and I don’t make it a habit of scheduling the photos in order to coincide with specific times of the year, which is why it’s the first post of 2018 and you’re seeing a field full of flags. I thought about using a post that would serve as a more symbolic way of ringing in the new year, but then I realized I would just post the next photo in my list and let the interpretive chips fall where they may. Hence this week’s image of a bunch of flags on January 3.

There is, as you might have guessed, a great deal of symbolism in the flags themselves even though it has little to do with this particular day. These were placed on the OSU Library Lawn in observance of Veteran’s Day in order to honor the lives of the nearly 7,000 soldiers who have died since the United States started fighting the War on Terror. As my friend Ryan pointed out it might have been more appropriate to display these at Memorial Day instead, but…well, it is what it is. I felt a little strange taking pictures of these flags because this scene is one of remembrance and contemplation, and getting out my DSLR to snap some photos just felt kind of cheap. However, as I walked around on a chilly November afternoon looking at the flags and examining the pages of two large volumes containing the names of all the soldiers, I noticed several other people taking photos, kneeling to place memorabilia, and pausing to consider the meaning of the scene. I also saw plenty of passers-by who went about their business. In short, everyone was free to interpret, photograph, and interact with this scene however he or she saw fit. For me that involved my camera.

One tricky part of photographing a scene like this with a 50mm lens is that you just don’t have a very wide field of view. This image cuts the sides off the flags which essentially omits hundreds of them from the scene altogether, which is a direct result of the 50mm lens as opposed to something wider like a 35 or 28. In fact, I saw photos on Instagram and Facebook of this same scene–photos that were taken with iPhones and pocket cameras–that I thought were far superior to this in terms of composition and overall emotional impact. Here the flags seem cold and distant, and there is literally a wall of separation between me and the subjects. Shooting with a wider lens would have let me get closer to an individual flag while also showing the broader context, but alas, this is Weekly Fifty not Weekly Thirty-Five.

The challenge, then, was how to photograph the flags in a meaningful and respectful way while working within the limitations of my gear. They went in the ground on a Wednesday and I happened to have my D7100 with me, which I quickly realized would not get me the shot I was looking for due to its even more limited field of view because it is a crop-sensor camera. I also knew I wanted a shot without any people in it, so I returned with my full-frame D750 the following morning on my way to work (I bike past this spot almost every day) and climbed up to the terrace in front of the library to get this shot. I actually stood in front of the fountain right where the arrow is pointing in the picture below, with my feet in a bit of water, in order to get the angle of view I wanted.

I believe I shot this at f/4 or f/8 to get the image nice and sharp, and had to boost the shadows while bringing down the highlights in the sky in Lightroom in order to arrive at a finished image that I felt accurately represented the scene. Taking this picture was an exercise in planning, knowing my gear, and understanding some basics about composition and I’m glad I got the opportunity to do it.

I just wish the flags didn’t have to be there at all in the first place.