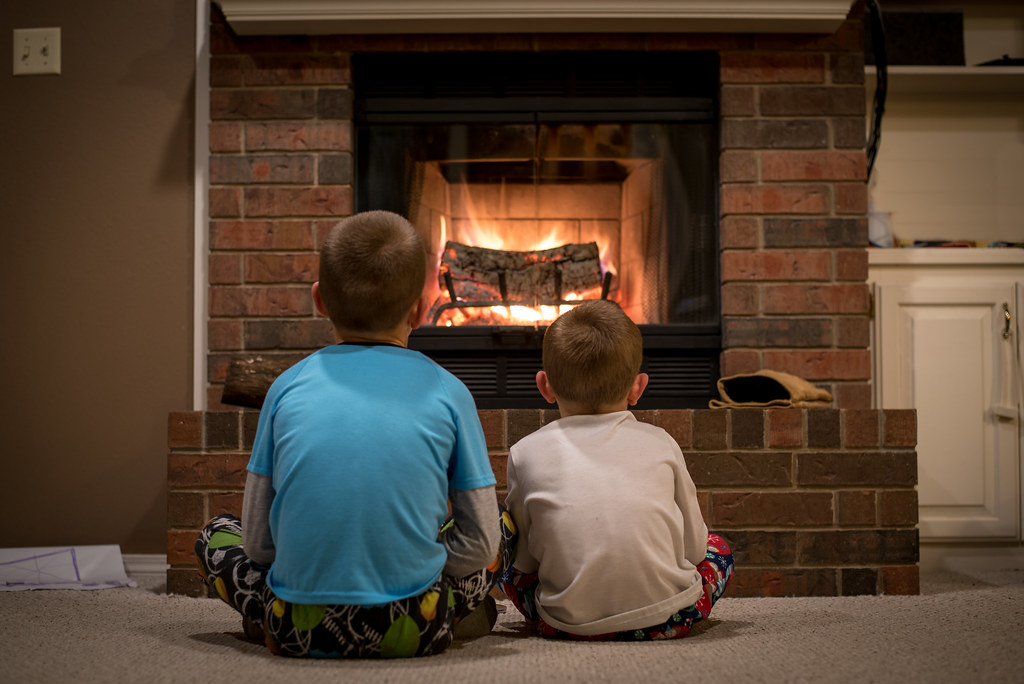 You can thank the Winter Olympics for this one. This past February my kids, as well as my wife and I, were caught up in the excitement of the various competitions especially the luge, the bobsled, the speed skating, and of course the snowboarding. We had a couple of snow days in the mix too which meant the kids were home from school and, as a bonus, I was able to burn through a ton of wood in our fireplace. (Some winters we don’t burn any wood at all since it’s so warm here in Oklahoma!) On this particular evening our boys were ready for bed early having taking their baths, brushed their teeth, and put on their PJs so they spent a little while just watching the fire before the Olympics came on and then, about a half hour later, heading for bed.

The kiddos were a little squirrelly so I must confess this image is just a bit staged in that I had to ask them to hold still for just a few seconds so I could take their picture, but overall I think it captures the general essence of the scene fairly well. Normally they’re not so quiet and serene but they knew I was trying to get a picture so they complied without too much fuss, and I was able to get just a couple of shots with my D750 + 50mm lens before they started jumping around and tackling each other. This was a bit unique in that I used my little Gorilla Pod tripod so I could shoot with a longer shutter of 1/6 second, hence the motion trails in the fireplace, and normally there’s no way I would ever get a decent image of my kids with such a slow shutter! I shot at f/2.8 to get a shallow depth of field which, compared to my other pictures shot at f/4, added a nice soft touch to the scene.

You might also notice a weirdly-colored blotch on the right side where I had to remove some pictures of my kids’ faces, along with their names, which were prominently displayed in a frame. I don’t like to show their faces here on Weekly Fifty so I used Lightroom to remove that part of the image and while I probably should have used Photoshop to make the edits a little less blatantly obvious, I just didn’t want to take the time to get too detailed. I hope it doesn’t mess with the overall impact of the image too much, but it’s the kind of thing I’m guessing you won’t see unless it’s specifically pointed out to you. #fingerscrossed