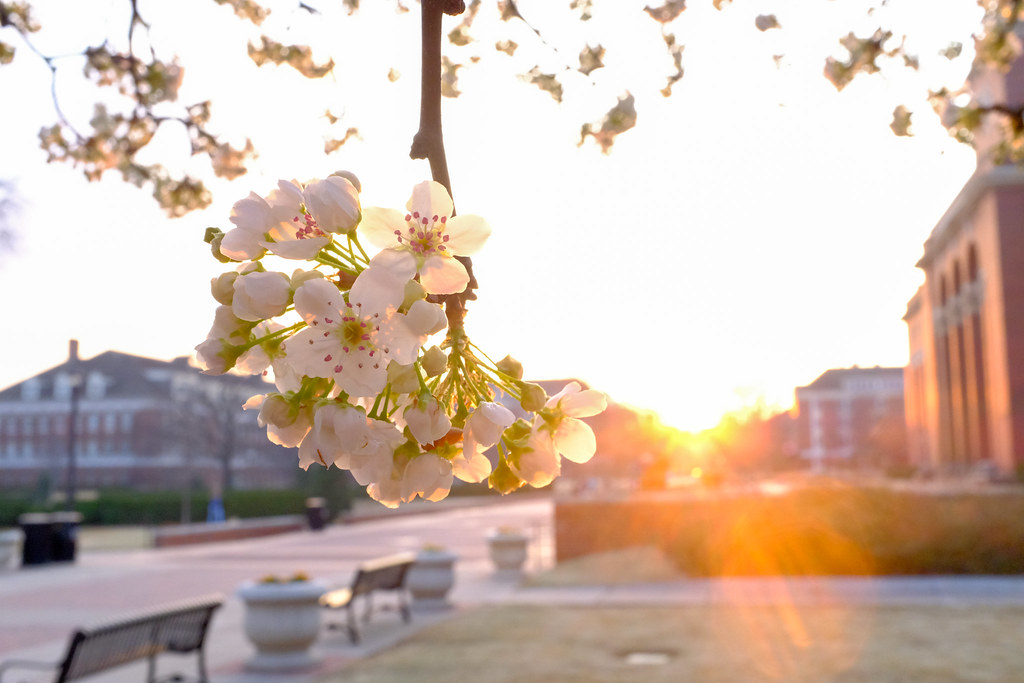 This was a bit of an unexpected photo that didn’t really turn out how I was hoping, but then, I’m not exactly what I was even aiming for in the first place so I can’t really complain. I took this when my wife and I were walking around campus with some friends in mid-March and I noticed these flowers on a tree which, combined with the setting sun and the relatively empty brick pathway, made for what I thought would be an interesting composition. I had my X100F with me since it’s my go-to camera for everyday casual shooting and while it worked OK on this image I think using a 50mm on my D750 would have been a little better for what I had in mind.

Nevertheless, they say the best camera is the one you have with you, so I tried to make the most of what I had. Using my X100F I stopped down to f/11 to get a bit of lens flare and also keep the background blur from getting too out of control, and also switched from my usual Classic Chrome simulation to Velvia which is, as I understand it, better suited for nature and landscapes. I actually shot a couple similar images using Classic Chrome and didn’t really like the colors that much but Velvia gave me an image that was at least closer to what I was imagining. I also overexposed the image by more than two stops in order to keep the white flowers from being too dark.

This image represents a departure from the workflow I’ve used for several years now, which has been like this:

Lately I just haven’t been as interested in the painstaking process of editing so I’m using JPEG more and more, and trying to get as much right in camera as I possibly can. So for this, and most of my casual (i.e. not for clients) shots my workflow is now this:

• Shoot in JPG, import to Lightroom or my phone, export

I know I could use RAW+JPG on my camera but in truth I just don’t care about editing the RAW files mostly because it takes so much time, and if I can get the picture right when I take it then I’m perfectly happy to forego the editing process altogether. It’s fine for casual shooting but on a picture like this, which probably should have some editing done to it, I’m finding that my new workflow isn’t quite ready for prime time. Perhaps I need to find more of a middle ground, or learn to use my camera better, or even just be happy with the results and move on. Either way it’s a fun process and I’m enjoying the ride :)