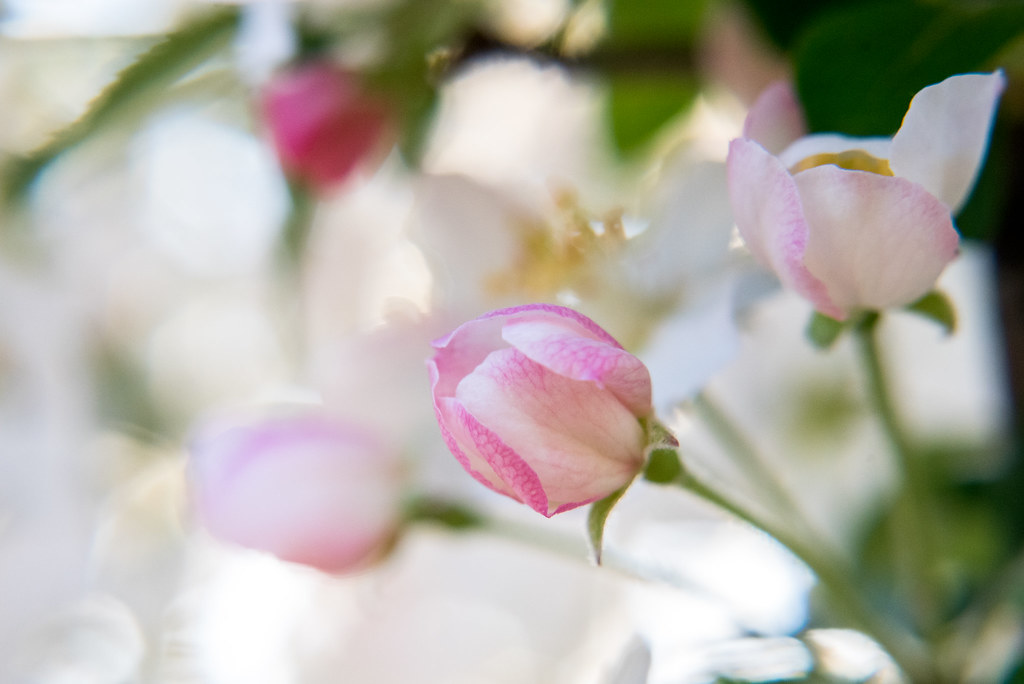 This was a fun opportunity to get out the 50mm lens with some close-up filters, and also an example of why it’s important to to look around you and see what’s happening so you don’t miss a shot if one presents itself. These flowers are about the size of a pencil eraser and they are on a tree that’s about 20 feet from my building at work, and I don’t think I would have taken much notice had circumstances not lined up just right. I went across campus one afternoon with a coworker who pointed out the super tiny but really pretty petals on this one particular tree, and I realized right away that this would be a fun photo opportunity with the right gear. The next morning I returned to work with my 50mm lens and +4 close-up filter in order to see if I could capture these flowers on film. (Digitally speaking, that is.)

As I walked around the tree looking for some shots there was a bit of an issue in that there were almost too many opportunities from which to choose. Flowers just like the one you see here were everywhere on this tree, which made things a little difficult because virtually any of them could have resulted in good pictures. I soon realized that despite having a thousand potential subjects, I had to really look close to find one that would actually work for a photo.

Getting this shot required looking at all elements within the frame: the subject, the lighting, the background, the aperture size, and even the direction that the flower was pointing. I ended up shooting almost straight into the sun which resulted in quite a lot of backlighting, but the tradeoff was a nice blurry background and a white backdrop for the pink flower in the center. Most of the other angles from which I tried taking pictures resulted in images that were too muddled, too bright, or too disjointed to really function as proper photographs.

The very next day when I walked up to my building I saw that most of these pink flowers were gone–they fell off, closed up, or turned a light shade of brown. I was able to get this picture in a relatively fleeting moment that won’t come around for another year, and when it does you can bet I’ll be there with my camera to see it :)