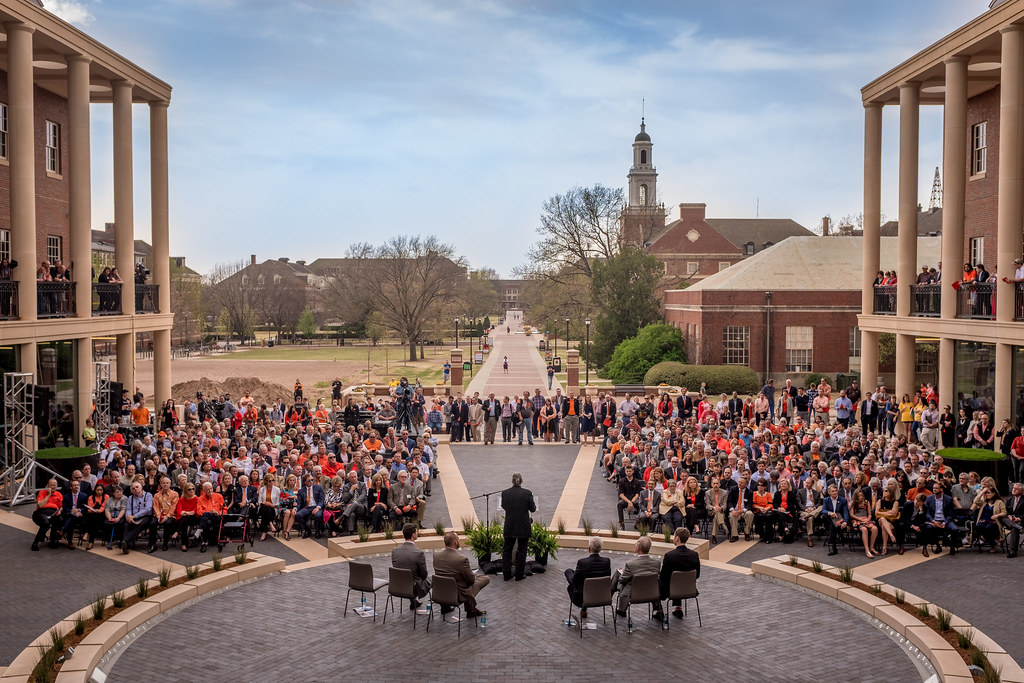 I spent my first few years at OSU working as kind of an all-in-one tech guy for the distance learning program at the Spears School of Business. I made videos, took photos, ran a/v equipment for conferences, and did tech support for our learning management system and made a lot of good friends in the process. Just as I was transitioning to another job on the other side of campus the Business School jump-started their plans to construct a new building and four years later, in the spring of 2018, it was finally completed. Classes were held in the new location starting in January of 2018 but it wasn’t until the middle of April that the building was officially declared “Open for Business” by Dean Eastman at a ceremony involving hundreds of alumni, staff, students, and donors.

Like most days I had my camera with me when I went to work that morning but didn’t really plan on getting a shot like this during the ceremony, and in fact through most of the speeches and video presentations I was standing on the north side under balcony trying to avoid getting rained on! Thankfully the storms just grazed Stillwater that afternoon and as the clouds were lifting and the events were starting to draw to a close I ran over to the middle of the second floor balcony, switched my Fuji X100F to RAW, and fired off a couple shots before heading back to join some of my friends where I had been standing. A few minutes later the program ended and everyone dispersed to see the new location.

Once I loaded this image up in Lightroom I was a little worried that I didn’t quite get what I was hoping for, mostly because the sky was kind of an overexposed horizontal patch of white. Thanks to the magic of RAW I was able to recover a huge amount of color information and, along with a couple other editing tweaks, ended up with the picture you see here. Sure a wider lens would have been nice like the 17-40mm that one of the Spears photographers used on these shots, but that wouldn’t have been nearly as portable and unobtrusive as my little X100F.

It was fun to get this shot and see the new home of my former workplace, and more importantly to spend time with so many good people who help make the OSU campus a great place to work :)