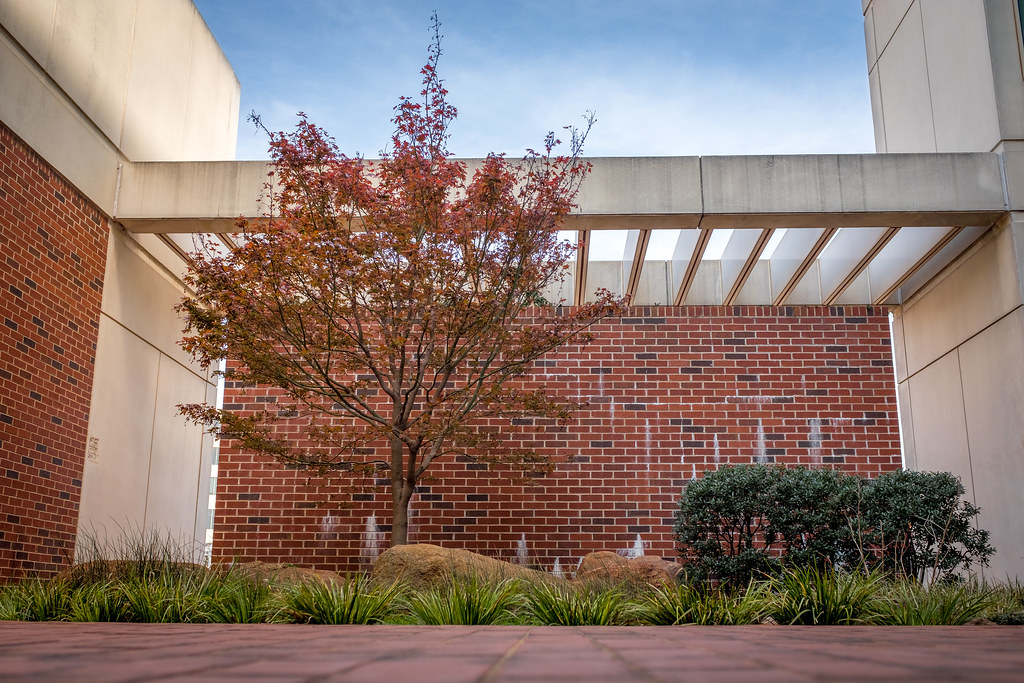 Another example of how photography, as Forrest Gump might have said, is like a box of chocolates: you never know what you’re gonna get. A few weeks ago I was walking past the School of Geology, as I’ve done many many times before, and happened to notice something strange about a little brick wall that I had seen before but never really thought much about. I paused and saw that there were openings on either side of it large enough for a person to pass through, so I stopped and took a short detour to check out what, if anything, was on the other side. What I saw wasn’t all that much in the grand scheme of things, but it was a nice little patio with kind of a mini arboretum, if you will, that I would imagine most people on campus (just like me) didn’t even know was there.

If you’re curious, click here and zoom in a bit on the School of Geology. The black rectangle where the sidewalk jutting out from the curved rode hits the other north/south sidewalk is right on the other side of this week’s picture. And ask yourself: would you ever think to look behind the wall? I sure didn’t!

When I first stumbled across this tiny oasis I had my X100F with me and took a few shots from about waist level, but they didn’t really look how I was hoping they would turn out. I returned the next day and took a couple more shots with my camera right on the ground and pointed upwards in order to capture the garden as well as a bit of sky, and got just the shot I was envisioning. And once again the 35mm focal length of that camera proves to be just about perfect for the type of shooting I like to do on a casual everyday basis.

I had to edit the sky just a bit to bring out some of the color (I used a gradient filter in Lightroom and then erased parts of it on the tree leaves using the filter brush with auto-masking enabled) and made a few other color adjustments, but the one thing I really wish I could get rid of is the…uhm…white markings on the wall. Let’s just say it’s not paint :) I suppose someone with a lot of time and Photoshop skills could remove those but I’m content to leave the image as-is and enjoy the story behind it of discovering a hidden gem right in front of me. And now that you know about it too, maybe you’ll check it out next time you’re at OSU :)