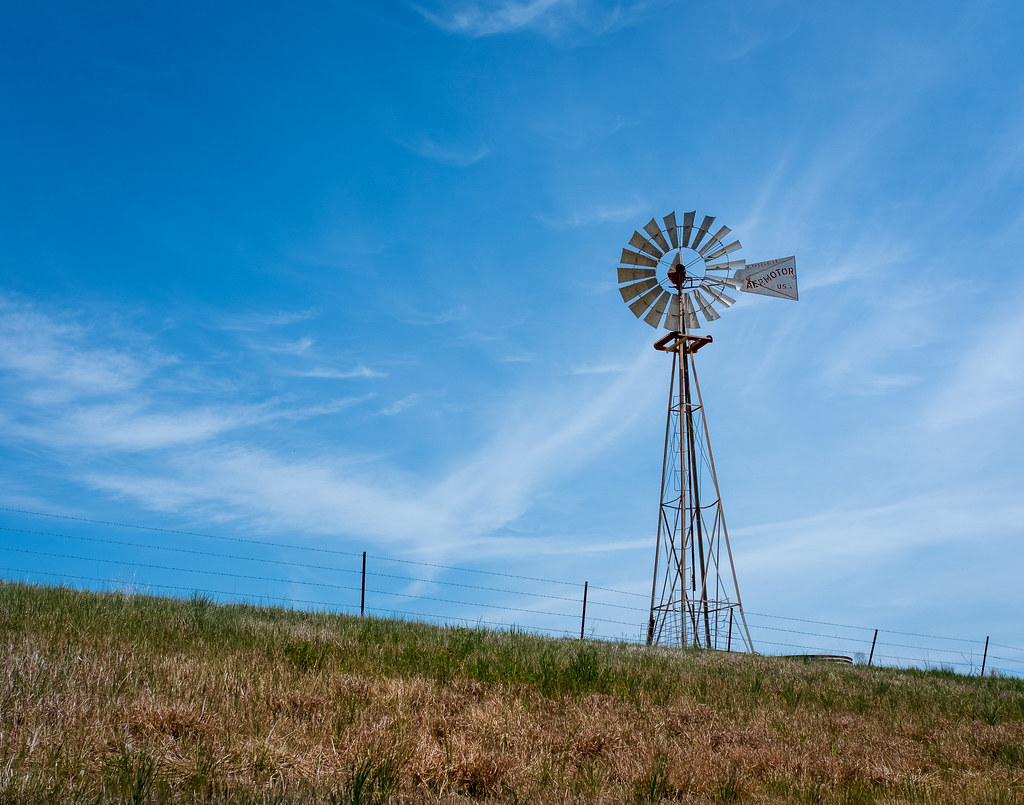 I know I posted a windmill picture last week but I couldn’t resist sharing another one from the return trip on my visit to Nebraska. This was south of Junction City, Kansas, and I shot it at about 2pm on May 6. The weather was nice and I liked how the clouds streaking through the sky gave a bit of scale to the image while adding some dynamic elements too. On my return home I didn’t plan on stopping much since I wanted to get back to my wife and kids, but as I approached this windmill I knew I couldn’t pass up the opportunity to get a picture. What really stood out to me was how perfectly it was positioned in the sky, with the vanes and nacelle clearly visible in the afternoon light. If it had been turned a bit to the left or to the right the image would not have had nearly the same appeal, but as it stands I was able to get what seems (to me, anyway) to be a pretty solid photo of a windmill on the prairie. Basically, when I think of the classic image of a midwestern windmill, this is what comes to mind and I’m glad I was able to get this particular shot.

Shooting with my X100F meant I could not change my perspective or alter the composition by zooming or fiddling with levers and dials, and instead I had to park my car on the west side of the highway, walk across to the grassy hillside, and move around until I got the shot I was looking for. Or, rather, until I got a couple dozen shots while not really being certain of what I was looking for. I knew that the overall scene would make for a good picture but I wasn’t quite sure of precisely what angle to use, where I should stand, what I wanted in the foreground, etc. Playing around with those elements turned out to be kind of fun and I ended up with a handful of images that were interesting and fairly compelling, but something about the way the sunlight bounced off the rudder in this particular shot made it stand out from the rest.

I did try moving around so I could see the fence receding into the horizon but that had the downside of creating a composition wherein the windmill was somewhat sideways and despite the fact that I tended to prefer the natural elements in that type of picture I kept coming back to the image you see above with its distinct windmill shape set against a bright blue sky. I shot that at f/5.6 since there was clearly no lack of daylight, and I wanted to get a picture that was nice and sharp where shallow depth of field is simply not needed.

Taking these two pictures (this one and last week’s) was a fun way to get out and see my surroundings a bit more than I’m used to, and even had the practical benefit of helping break up my drive a bit and allow me to get out and stretch my legs. And my advice for anyone reading this post is to do the same: the next time you find yourself traveling, consider the road less taken and see what sights you will discover along the way.

Edit: My dad found this windmill too, just like the one from last week. Thanks again, Dad!