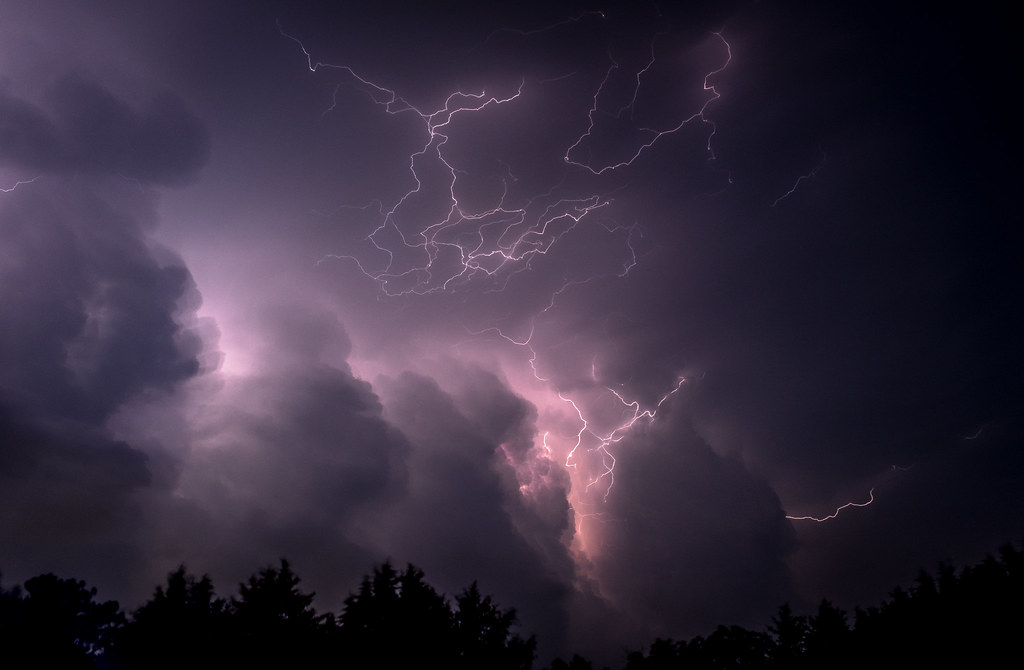 Each year my family takes a vacation at Milford Lake in Kansas and each year I try to take a couple of images that would work well here on the blog. In the past I’ve made it a point to bring my 50mm lens, sometimes with accompanying close-up filters, to get shots of nature that are a bit different from my usual slew of Theta Pond pictures but for our 2018 trip I used (what else?) my Fuji X100F almost exclusively. Once again the 35mm (equivalent) focal length proved to be ideal for shots of what really matters: my wife, my kids, my siblings, all the nieces an nephews, and of course my parents and it was nice being able to use the same camera for pictures that would go here on the blog now that I’ve opened myself up to other focal lengths.

Last year my brother Andy and I went down to the boat launch as a storm rolled in and I was able to get this shot of some lightning with my 50mm lens. I thought it worked out pretty well and the longer focal length was nice since the clouds were so far away, but this year a few conditions gave me a little different photographic opportunity that resulted in a photo I think is much more interesting. For one, the storm was much closer than last year and a bunch of us just stood outside our cabins looking straight up at the sky to see a brilliant display of lightning overhead. Also because I had my X100F instead of a 50mm lens I was able to get a much broader view of the scene that simply would not have been possible otherwise. I used a Gorillapod instead of a standard tripod which turned out to work pretty well and actually kept my camera quite stable during longer exposures.

I shot about ten images of the clouds and lightning with shutter speeds around 30 seconds but then I decided to angle my camera down to get some trees at the bottom of the image as a way of providing a sense of scale and context. My shots of clouds with lightning bolts searing through the sky were interesting but not all that compelling because there was nothing to provide a sense of where this was happening in relation to the viewer, whereas this one and a couple others like it did a lot more to make the image seem more personal and relatable. I shot at f/14 to get a super wide depth of field, ISO 200 for a nice clean image, and held the shutter button down with my finger for about a minute in order to get several lightning bolts in a single image.

The one downside to this technique was that successive lightning strikes illuminated the clouds at different times which shows up in the final image as a kind of ghosting, especially with the clouds on the left. It’s not something I noticed initially and while I kind of wish it wasn’t there, I do think the tradeoff is well worth it. Shorter shutter speeds resulted in images that just weren’t all that interesting because they only contained one or two lightning bolts, and if longer shutters meant some ghosting artifacts…well, it’s all part of the fun :)