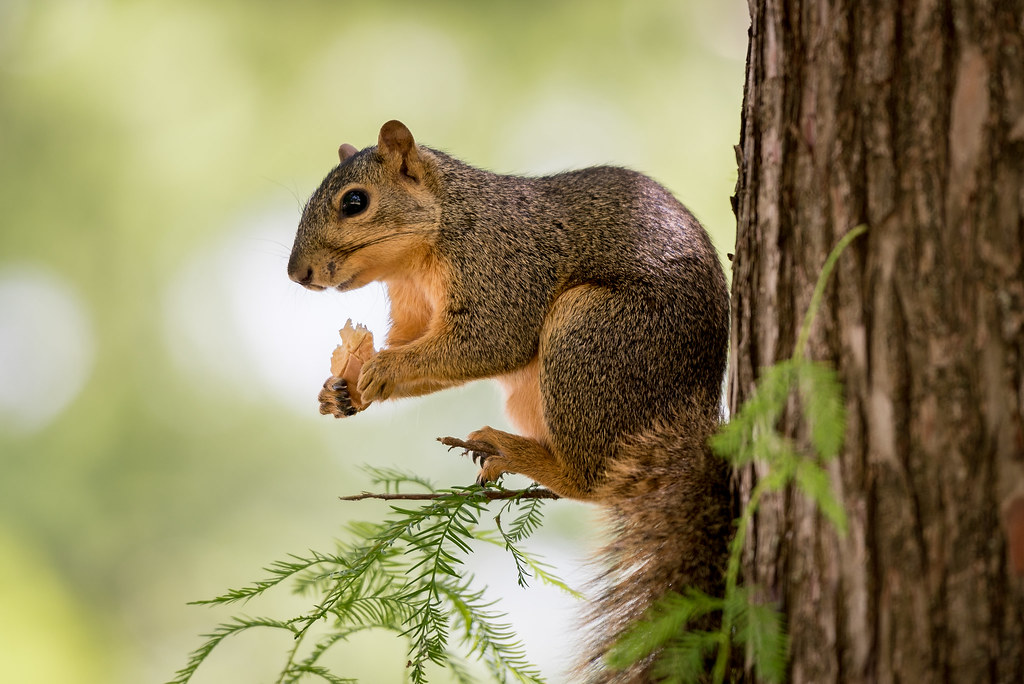 Ah yes, another Theta Pond Squirrel photo. What can I say…I like taking (and sharing) these! One thing I’ve realized as I take squirrel photos is that they’re more interesting, to me anyway, if the subject in question is actually doing something. I’ve got plenty of squirrel photos where the little Sciuridaes are sitting or staring but while the images might be technically competent they aren’t as visually compelling. To wit: a sharp, focused, well-composed image of a squirrel just sitting around is, at the end of the day, just a shot of a squirrel sitting around. It’s not interesting or compelling and certainly doesn’t tell a story.

This picture though, with a squirrel in a tree holding a crust of bread, is compelling for a couple of reasons. First, the critter is in a tree and not on the ground which…I dunno. It seems more interesting to me somehow. Second, he (she? I have no idea) isn’t holding an acorn but a bit of bread so clearly he (I’m just going to run with it) must have got it from a person. Since this is Theta Pond and geese are everywhere, clearly this little guy had to act quick before an avian friend swooped in to snatch his prize. Finally, the bright green and white behind the squirrel make it stand out much more than if it were on the ground or set against some leaves. I shot this at 200mm with an f/2.8 aperture and was quite pleased with how sharp the resulting image ended up, though perhaps I should have erred on the side of caution just a bit and went with f/4. But all’s well that ends well, right?

One other aspect of this photo that you wouldn’t know just by looking at the image is that the person who gave the bread to the animal was, in fact, my six-year-old son. I was taking some photos of people and he was hanging out at the pond with me, and he was ecstatic at the opportunity to engage with some of the local fauna by way of a hot dog bun. He asked if I could take some shots of squirrels and I gladly obliged, and even let him take a few of his own which I normally don’t do when using the big camera and lens, but sometimes you just gotta go for it and let the kids experiment. All this results in a picture that hits all my check marks while also reminding me of a fun time I spent with my child, which is a nice bit of extra icing on the photographic cake :)