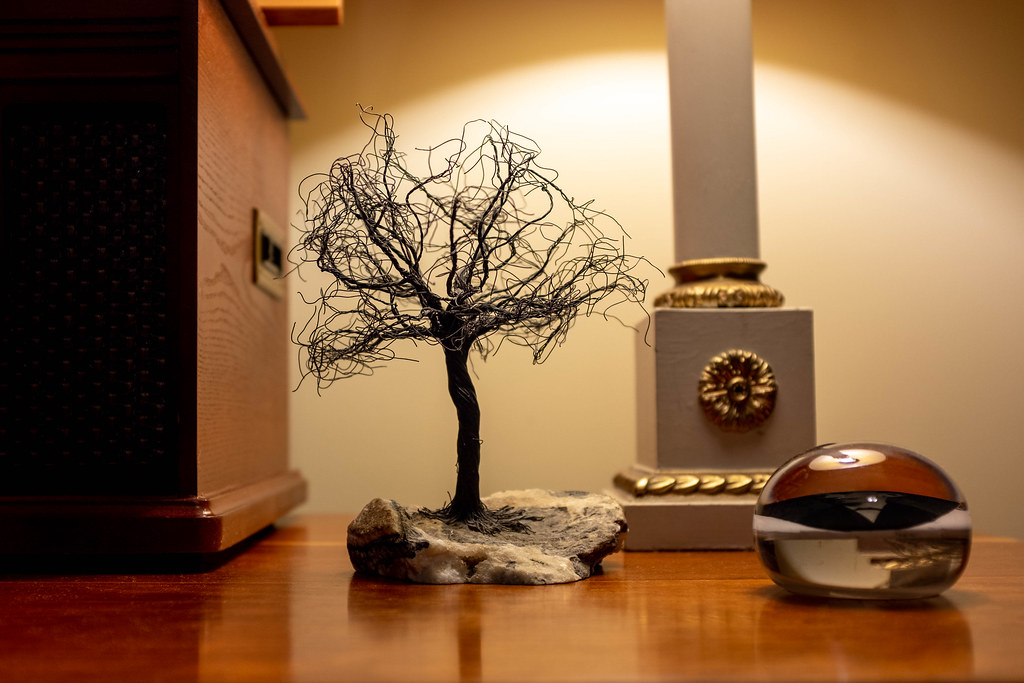 Every time we go on a trip out of town I like to keep my eye open for possible photo opportunities beyond just taking snapshots of friends and family. Sometimes they present themselves plain as day, but other times I have to look just a bit harder which was the case here. This is a small wire tree at my in-laws’ house where we spent a few days this summer reading, relaxing, watching the kids play, and solving a communal crossword puzzle too :) We mostly spent time at their house with the exception of going out to eat, attending church, and taking some walks around the neighborhood and after a little while I was starting to wonder if I would be able to spot any potential Weekly Fifty images.

The last evening we were at their house I took note of this little wireframe creation on a table in their living room and wondered if it might make for an interesting photo, so I took a few minutes to play around with the idea. I tried not to alter the scene except for just scooting the glass paperweight over a few inches, lest it come across as blatantly artificial. It would have been fun to shoot this with a 50mm lens but all I had was my X100F so I did what I could to make that work.

I used my Gorillapod tripod with its legs wrapped around the back of a kitchen chair which allowed me to use a slightly longer shutter speed of 1/30 second. Depth of field was an issue because I wanted a bit of foreground and background blur but also wanted as much of the tree branches in focus as possible, and after trying a couple different aperture values I settled on f/2.8 which turned out to be a decent compromise. Focus was entirely manual but the focus peaking on this camera (which is also available on a lot of other cameras–check your manual to see if you have it too) helped mitigate some of the issues I might have had otherwise. ISO was as low as I could get it in order to give me as smooth and noise-free of an image as possible.

I don’t have a grand story to tell about this photo, though perhaps my mother-in-law (who is a frequent reader of this blog) might leave some information in the comments :) I just thought it would be a cool picture given the interesting subject and late-night lighting, and overall I quite like the results.