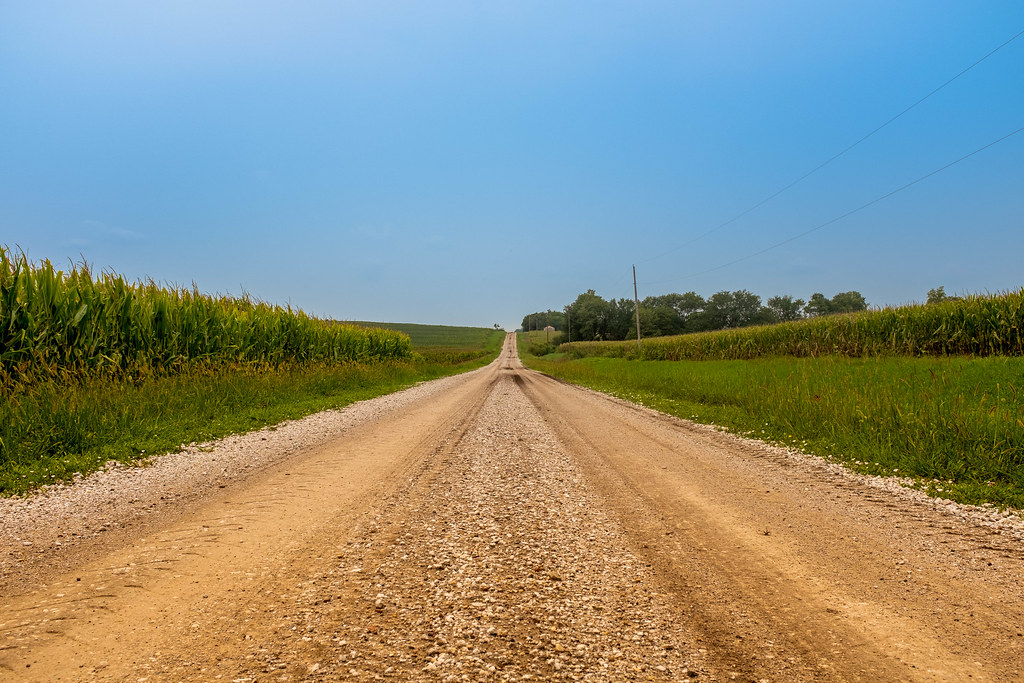 This is the kind of picture that, if you don’t live in the midwest, you might think anyone in Nebraska, Kansas, or Oklahoma could take any time they wanted to. After all what could be more emblematic of the Great Plains than a dirt road, corn fields, and an endless blue sky? Interestingly, scenes like this are not actually all that common here and most of the time a picture like this would also include farm houses, silos, tractors, barns, or even buildings and cities on the horizon. You’ll also notice that the scene here isn’t exactly flat either. Rather it’s a slow undulation of earth that feels casual, homely, and downright comfortable.

True, there are plenty of flat spots in the midwest United States but there’s a lot of variation too which is why I stopped to take this photo on a recent trip from Minnesota to Oklahoma. It kind of hits several Midwestern stereotypes in a single frame, none of which are a true representation of what we’re all about here but all of which are parts of the whole. We’ve got corn and dirt roads but that’s not all there is. Though no matter where you go up and down and across these plains you’re sure to find a great blue sky, provided it’s not storming at the time :)

I shot this with my Fuji X100F which is great for many different purposes but perhaps not quite ideal for landscapes as you can see here. A wider lens would have been nice but alas, the Fuji is stuck firmly at 23mm (unless you have a wide-angle adapter, which I do not) and as such I had to make the best out of what I had available. The bigger questions for me when taking this shot were what angle do I shoot at, what height do I position the camera, and how far down the road do I travel? Truth be told I didn’t really consider the final issue that much since I just wanted to get on with my trip (Highway 75 is about 1/4 mile behind me in this shot) but I did take a handful of shots at different angles and positions before getting one I was really happy with.