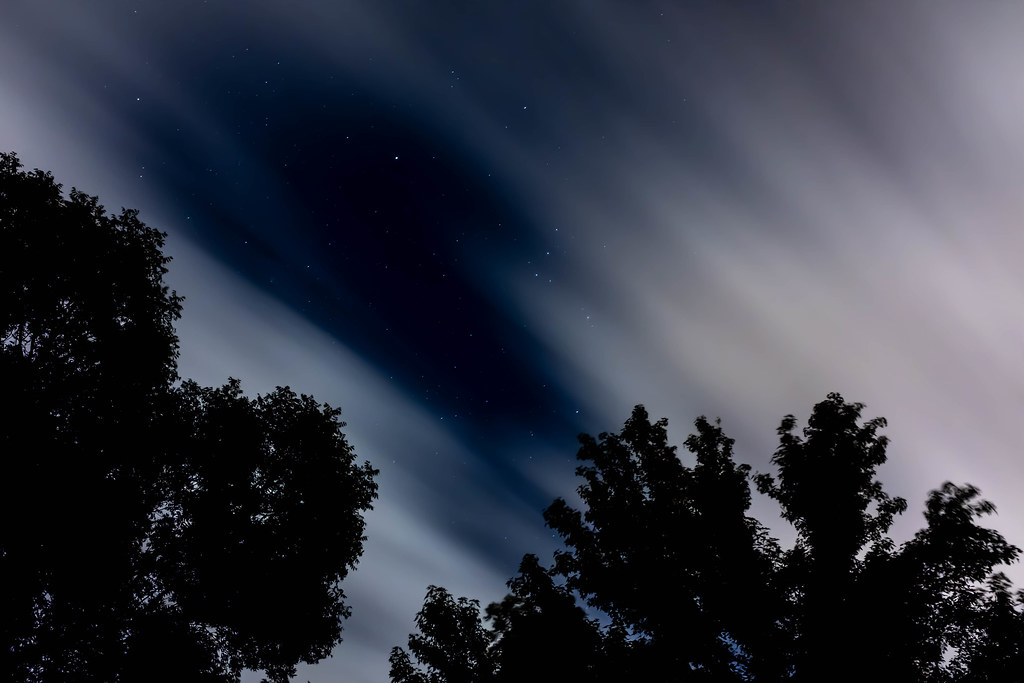 Sometimes you will hear people talk about how it’s possible to get great pictures in your own backyard, but the term backyard is used somewhat loosely and what people really mean is you don’t have to travel very far outsize of your normal daily travels. In this case though, I was able to get what I think is kind of a cool picture literally in my own back yard. Or, my back porch to be more specific.

Every morning my routine follows a somewhat similar pattern: Get up, shower, and sit in a particular spot in our living room to spend some time in prayer before making breakfast. Two days before taking this picture I was praying while looking at the night sky through the sliding glass door to the back porch and noticed that I could clearly see the Orion constellation hanging low above the neighbor’s tree. The temperature was mild, the wind was quiet, and the sky was crystal clear which, I thought, would make for a cool photo. I brought my X100F and tripod outside, took a few shots, and wasn’t really happy with the results. It seemed kind of boring and uninteresting, which was kind of the opposite of what I was aiming for.

The solution, I realized, was to take a long-exposure shot of the same scene with clouds moving across the sky to add a sense of motion and scale to the image. The next morning I set out to do just that, but was foiled due to the total lack of clouds for the second day in a row. While normally it’s kind of neat to be able to see a clear late-summer sky and gaze up at the stars, I was hoping for some clouds to obscure things just a bit. Thankfully the third day, the morning of September 13, I got just what I was hoping for.

After experimenting with a couple different exposure settings I found that 15 seconds at f/8 and ISO 1250 was giving me an ideal mix of starry sky and cloud movement. Much longer and the trees started to show too much motion blur, while much shorter shutter speeds didn’t give me the kind of cloudy streaks I was aiming for. Of the ten images I shot on my back porch I liked this one the best because it seemed as though the clouds were drawing my attention to Orion while also showing the silhouettes of the two trees for a sense of space and context. When I processed this image in Lightroom I found that the clouds were a bit too noisy for my taste so I moved the Luminance slider all the way to 100 (which I almost never do as it gets rid of far too much detail and texture) and that gave the clouds a smooth, dreamlike quality that I thought was really cool.