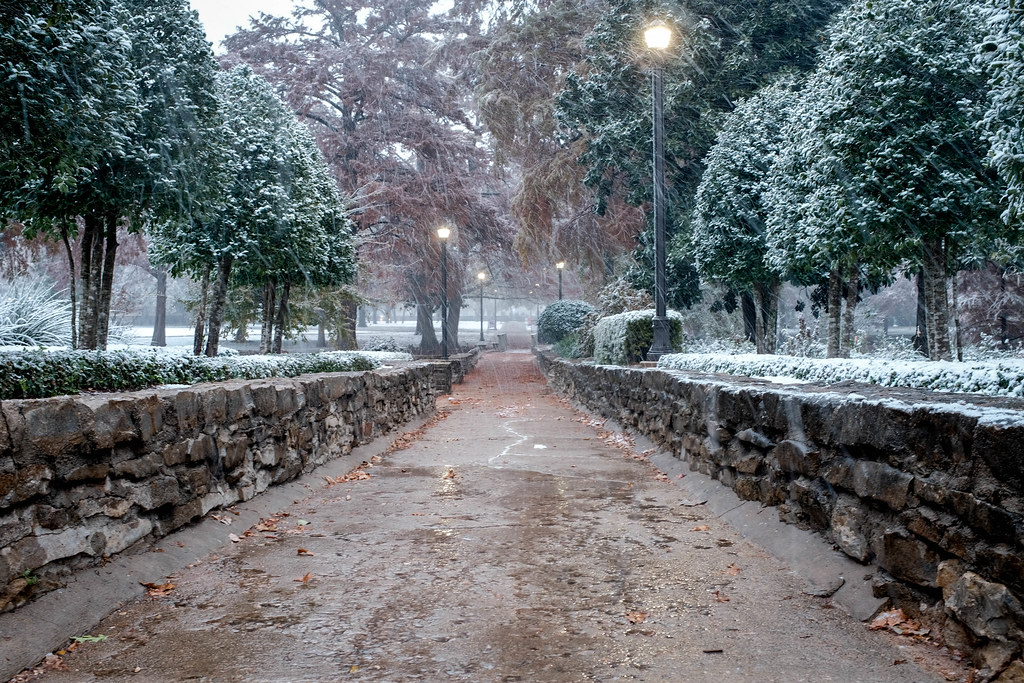 To close out 2018 I thought I’d share this picture that I took in November on a rather unusually snowy morning here in Oklahoma. Where as the classic Christmas tune speaks of walking in a Winter Wonderland, we don’t usually get scenes like that down here and instead it’s more common to have temps in the 40’s with a smattering of snow every now and then. It’s a welcome sight, then, to wake up to snowfall and chilly temps even if it’s only temporary, and as such I figured it would make an appropriate image for the time of year as well as the Christmas season.

Most of the year I don’t really post pictures that have much in common with the dates on which they are published, usually because I schedule posts many weeks in advance and don’t have any kind of grand master plan behind the photos I take and share. As the year winds down though I do like to take a minute and reflect on things, if you will, and that sentiment is kind of echoed in this image. In some ways 2018 was a difficult one and while I’m not going to get into the details here, suffice it to say that as the year is drawn to a close I find myself really taking to heart the old adage of live each day to the fullest. Not in the sense that I have to do extreme skydiving or run triathlons or anything like that, but that partly because of some losses my family and friends have endured this year I really have made more of an effort to use my time more intentionally. Some would say wisely, but I would say that I just hope I’m not being lazy or sitting around and waiting for things to happen and instead trying to make sure the people in my life know I love them and that I’m doing things that matter.

One of my favorite songs of all time is Heart’s Cry by Steven Curtis Chapman, and there’s a line in it that goes like this:

We don’t have a lot of time on this earth, and when I finally meet my maker I hope to stand before Him and know that I did well with the time He gave me. That I was a good father, a good husband, and a good friend. That we trained up our children in the way they should go, such that as they grow old they will not depart from Him. The scene in this week’s image, that of a path going into the distance on a snowy morning, to me represents both the mistakes of the past and the promise of the future, and while the way might be blurry at times we are never far from the love of Christ. The same Christ whose birth, and life, and death, and resurrection, we celebrate at Christmas and throughout the year.

So while this picture represents the end of one year it also, hopefully, shows the beginning of a new one as well. And while we can’t ever be sure of what the future will hold, we can do our best with the time we have right this very moment. So do what you can to make this day count.

As a bit of a postscript, I will say that my sister lost her three-year battle with breast cancer this past March. You can view my eulogy for her at the link below, and if you or anyone you might know would find a sense of comfort in the message please feel free to share it.