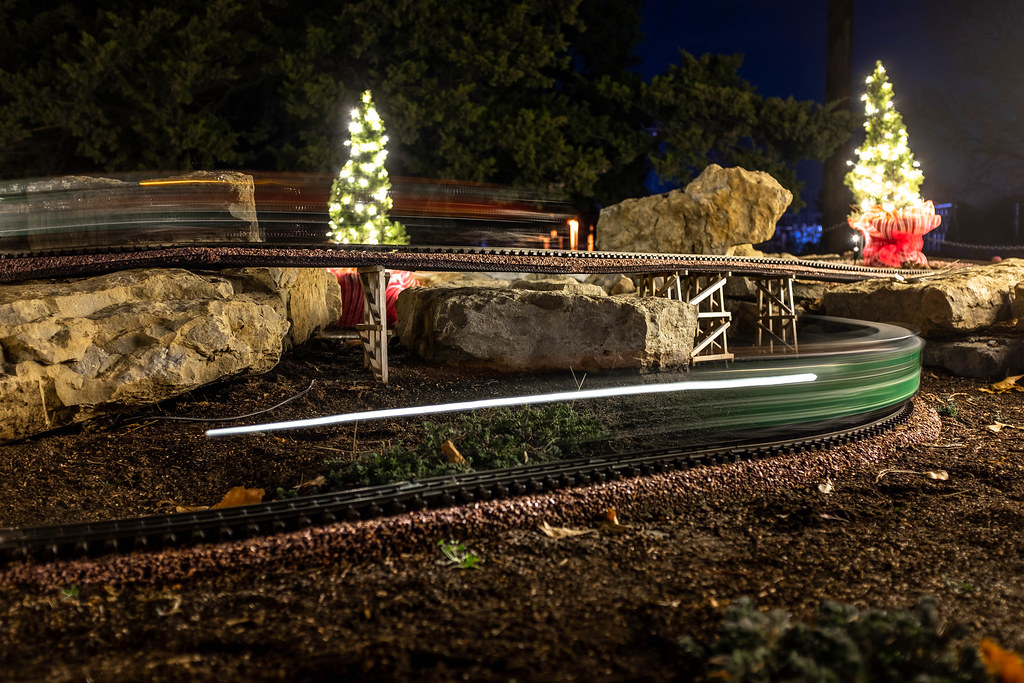 The local Botanic Garden here in Stillwater often has family events throughout the year, and one week before Christmas last year they invited the public to come out for snacks, crafts, and a bit of a bonfire as well. They recently installed a model train on the premises which runs a few times each month, and because we knew they would have it operating during their Christmas event I made sure to bring my Fuji X100F and little Gorillapod with so I could try a few long-exposure shots and see what happened.

I set up my camera and tripod on one side of the train display while our kids ran around looking at the lights and trying to keep up with the trains as they completed their circuits around the tracks. My goal was to catch the trains in motion but also have a shallow depth of field to create a sense of foreground and background, which meant I had to shoot at f/2.8 with an ISO value of 200. This left me with a 2.5-second shutter speed in order to get the right exposure, though in hindsight I could have activated the built-in ND filter and gotten about seven seconds or possibly even more. I manually focused on the rocks because I wanted them to be nice and sharp, and I wasn’t too worried about the trains not being super well focused because I knew they would end up looking like blurry streaks anyway.

After getting one or two shots that I wasn’t quite happy with, I realized that I could use the burst mode on my camera to get five photos in succession and then just pick the one I liked the most. This resulted in several mediocre images but a couple ones that I really like, especially the one posted here. I always like the sense of motion that light trails give a shot, and it was neat to hear my oldest son ask me how I got the trains to move so fast. In reality they were chugging along kind of slow, but the motion trails here make them look like some kind of supersonic bullet trains.

After spending just a few minutes here I put the camera away and joined my wife and my boys at the hot chocolate station where we also met up with some friends who happened to be at the same event. It was a clear starry sky on a crisp December night, and having this photo is a nice way to remember it all.