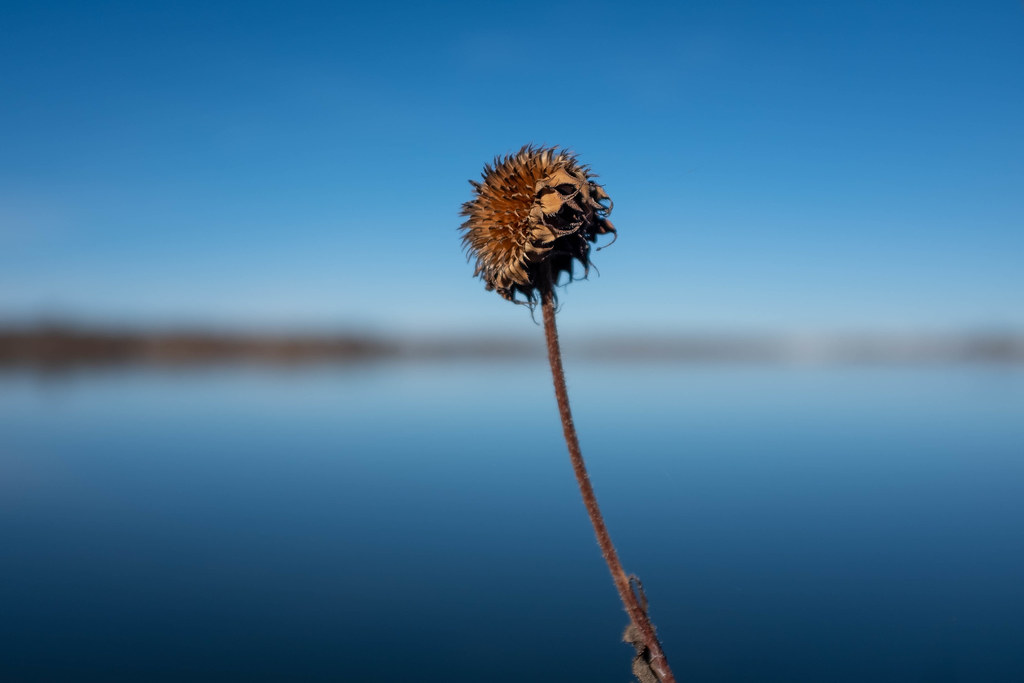 This was a fun picture to take partially because of the bit of challenge it presented, but also because it was just a really enjoyable day to be out at the lake with my camera. As my wife and I were walking around the lake here in town while our boys rode their bikes, I paused a few times to get some pictures just like this with various brown plants and leaves as subjects. The weather conditions were kind of unique in that there was virtually no detectable wind whatsoever, and no clouds in the sky, combined with temps in the 40’s or 50’s which made for really fun photo conditions. On the south side of the lake I got a couple shots like this but with grass instead of…whatever this thing is…and while they worked out OK the lighting wasn’t that great and the subjects were a bit unclear. I was shooting with my Fuji X100F so it was difficult to isolate my subject in the frame, but when we got to the south side of the lake and came across this scene I realized that it was just what I was looking for.

I knew I wanted this withered flower to be right in the center of the shot as opposed to on either side, but two big questions ran through my mind:

I really wanted the background to be blurred out but nevertheless discernible, but I wanted the subject to be nice and sharp as well. Shooting subjects close-up at f/2 is not exactly the X100F’s forte because that lens gets pretty soft in those specific conditions. F/4 didn’t quite give me the background blur I was aiming for, so I settled on f/2.8 even though the subject is a bit fuzzy around the edges. It’s a compromise I’m quite happy with.

As for the horizon, I wasn’t really sure what to do so I shot several different versions of this picture. Some were like this, some had the ball (or whatever you want to call it) right in the middle of the horizon, and some had it much lower. I ended up liking this one the best but not for any specific reason that I can articulate. It just looks the most interesting to me. I really liked that the lack of wind resulted in a glassy smooth lake surface, and even though this picture is awash with blue tones I hope it feels at least a little warm and inviting because that’s certainly how it felt on this particular day :)