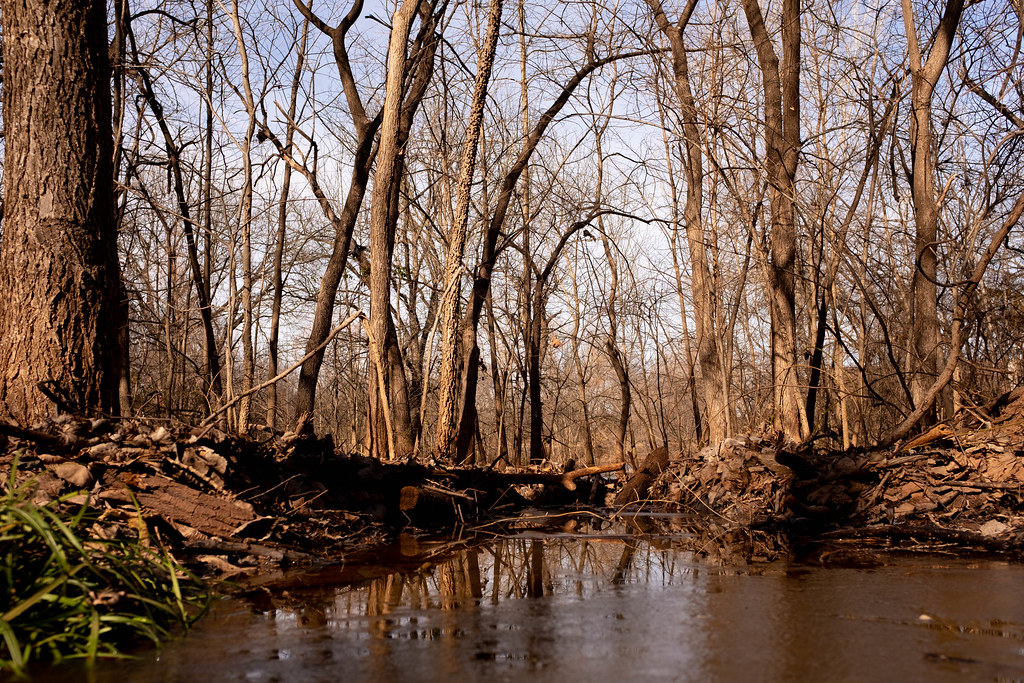 In some ways this picture reminded me of one I shared a few weeks ago from Arcadia Lake, and certainly the composition is quite similar in a lot of ways. Like that one, this was shot with my Fuji X100F from the ground looking up at the sky through a forest of bare trees. The foreground dominates the frame with a bit of a green patch on the left, the horizon lines are roughly equal, and both images were taken at a lake. Suffice it to say the first image was certainly on my mind when I shot this one, and that’s one of the fun things about photography: learning from your earlier shots and letting them inform your approach to subsequent pictures.

What might not seem obvious when looking at this one is that the setting is, in fact, vastly different. Instead of a huge lake at a state park, this one was taken at an outdoor classroom on the southwest side of town. The lake in this image is actually just on the other side of the patch of trees and it’s…oh, about maybe a quarter of an acre in size. You’d never know it from looking at the picture though, and what you also don’t see is the middle school just out of frame as well as the elementary school behind me. Nothing has been photoshopped here, just cleverly hidden thanks to how I composed the shot.

So what happened was, my wife and I took our boys to this spot on a chilly Saturday afternoon in late January when we needed to get them out of the house for a little while. The park we usually go to was kind of a non-starter since we had just been there a few days prior and the kids tend to do better with a change of scenery, so we went here and basically just let them wander around on the dirt paths for an hour and a half. They vacillated between throwing sticks into the water and finding out where various trails went, and even though their pants and shoes were much more muddy than we anticipated a great time was had by all and we left feeling like we had done something useful with the time. Not life-changing or earth-shattering, but hopefully better than sitting inside all day :)