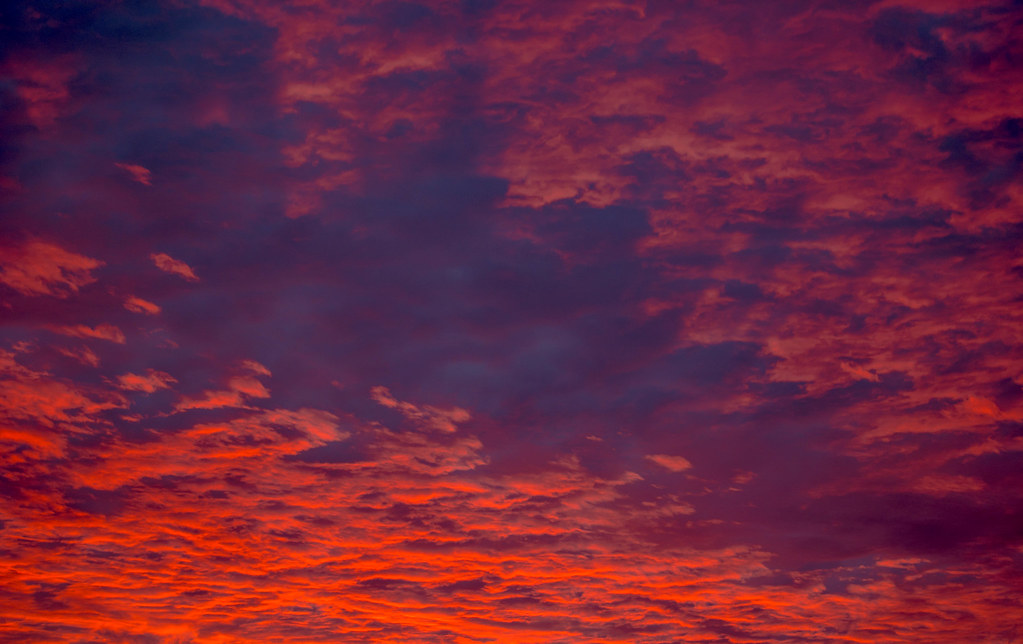 I promise this wasn’t processed through some type of Instagram-style photo filter. The sky really did look like this on the morning of January 10, 2019. When I pulled out of my driveway on my bike I could see that the sunrise was, for whatever atmospheric reasons cause these sorts of conditions, going to be especially rich and beautiful. As I rode past the vacant lot just south of my house I paused to take a few shots but they didn’t really do a great job of capturing the scene, especially with my D7100 and 50mm lens. So on I went until I got to the parking lot behind Hobby Lobby with an empty tree-filled field just to the southwest. I looked behind me to the east and it looked like the sky was positively blazing.

The tricky thing about photographing sunrises and sunsets is that it’s almost impossible to get the vision in real life to translate to a digital facsimile. Colors are never as vivid, and vistas are never as scenic, as when you see them in person with your own two eyes. That doesn’t mean you shouldn’t try though, and even though I only had my 50mm lens I figured I would do what I could to make the most of the situation. I shot a couple images with trees in the foreground but then realized that eliminating them altogether might result in a more interesting image, even though a picture of the sky alone kind of removes the possibility of context. And you know how much I emphasize context… :)

To capture the richness of the colors I underesposed the image by two full stops, and here’s what the RAW file looked like as a result:

Even in this picture the clouds are such a deep red that it’s almost difficult to believe unless you saw it with your own eyes. I didn’t want to lose those colors but I did want to punch up the sky just a bit to make the final image more accurately represent what I actually saw. I promise I didn’t adjust the saturation levels at all, and most of the editing was just adjusting the brightness of the dark areas as well as a bit of cropping on the bottom.

A few minutes later, as I turned to look behind me while waiting for a stoplight to change from red to green, I saw that the scene was almost entirely gone. Instead of a rich amber glow the sky was now a much more normal shade of blue and orange, wholly unremarkable. It’s amazing how quickly some photographic moments pass, and I’m glad I was able to capture just a bit of this one while I had the chance.