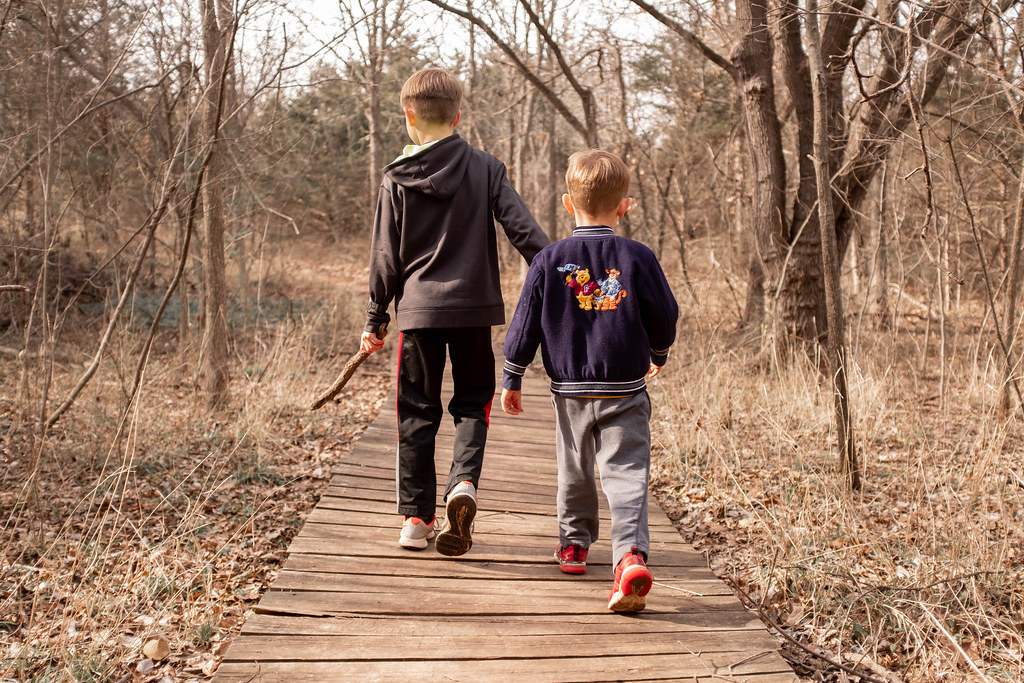 This pictures serves as a bit of a companion piece to the one I shared two weeks ago which was taken at an Outdoor Classroom by one of the elementary schools here in town. This was the same location but a bit further down the path and I wanted to snap a picture that sort of caught the essence of the afternoon, but didn’t want it to be forced or artificial. To that end I kind of snuck up behind my kids (running ahead and leaving my poor wife in the dust, albeit briefly) and popped off a couple images in rapid succession while they walked down a path. When I checked them on my camera I noticed something, though: too much of the scene was in focus. I had the lens on my Fuji X100F set to f/5.6 because there was plenty of light and I was using the mechanical leaf shutter which doesn’t work at high shutter values when shooting wide open at f/2.0.

Normally my solution to this is to simply stop down my lens, which is what I did here originally, but from a compositional standpoint I really wanted the kids in focus but the background to be a little blurry so as to draw the viewer’s eye to the children but still have a sense of place and context. I quickly changed to M+E shutter which forces the camera to use the mechanical shutter as long as it can, but then activate the electronic shutter if necessary. Then I dialed in an f/2.0 aperture, set my camera to 8fps drive mode, and caught up once again with my kids as they were crossing this bridge. And I was able to get the shot I was hoping for.

I know a lot of people tend to value the simplicity of mobile phone cameras but this image, to me, is a lesson in the value of learning how to manually control a camera to get the shot you want. A mobile phone would have been able to approximate this shot but the depth of field would have been so wide that the entire scene would be in focus. Portrait Mode could be used, if shot with a phone that supports it, but that only works with subjects that are close to the lens. In this case with subjects several meters away Portrait Mode would have been useless. I knew what I wanted my picture to look like, knew how to control my camera to get it, and am really happy with the result. That’s not to say mobile phone cameras are not value and capable and worth having…but just illustrates that sometimes it’s nice to have a dedicated camera and also know how to make it do what you want :)

Side note: This post roughly marks six years of me doing Weekly Fifty, and I wanted to thank all of you who have been a part of this blog for so long. I appreciate your comments, your support, and even your questions about photography. Thank you, and here’s to many many more years of weekly pictures :)