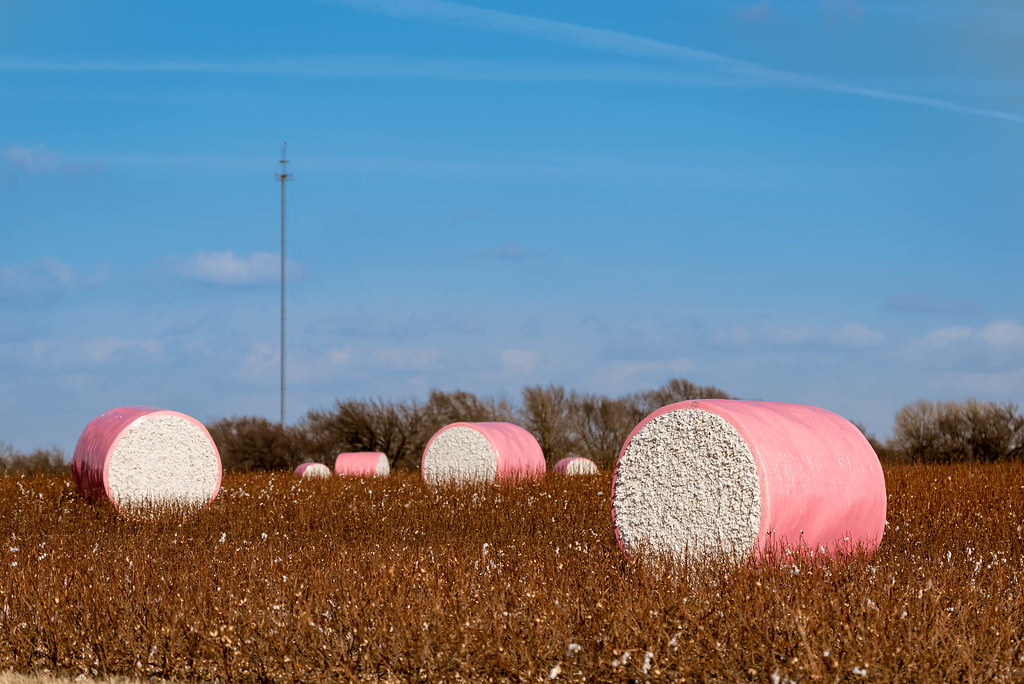 I must admit I had no idea what was going on here when I drove past this scene in Kansas a few weeks ago. I’ve spent pretty much my whole life in the midwest but I had never before seen giant bales of cotton wrapped up in bright pink, and the sight was almost otherworldly. But there I was, driving down Highway 77 southbound towards Oklahoma when just to the east I spotted a field dotted with these bulbous pink cylinders and I didn’t have a clue what to make of it. All I knew is it would probably make an interesting picture, so I turned off onto the shoulder, got out my camera, and set to work.

I had my Fuji X100F and my Nikon D750 + 70-200 f/2.8 with me, and I knew right away I would need the latter and not the former to get any type of decent shot. I’m not one to go around trespassing on random fields, and because I knew I wanted to fill the frame with the giant reddish weirdness that was one of these bales I figured my best option would be to use the zoom lens, which turned out to work pretty well. It’s sometimes tricky to judge things like depth of field on a small camera screen but I was pretty sure I wanted to use f/2.8 since I was really hoping to put one single bale in focus with the rest slightly blurry, and anything smaller than f/2.8 wouldn’t have really given me the background blur I was aiming for. I was just hoping it wouldn’t be too much blur, but in the end any fears of such proved to be unfounded.

The one thing that I was really going for was to have each bale in the shot exist in its own space within the composition–a lesson I learned from Sam Abell in his remarkable lecture The Life of a Photograph. (Skip ahead to about the 47-minute mark if you want, but really the whole talk is worth your time.) Much like Mr. Abell did in his shot of calves being branded I wanted each bale to be separate from all the rest but all work together to form a cohesive whole, so I scooted left and right until I was satisfied I got the composition I was aiming for. I wasn’t quite sure what to do with the radio tower in the background but I figured there was really nothing I could do, so I just didn’t think about it too much.

I did see a few other scenes like this on my drive but none were quite as intriguing, and now I know what I’ll be keeping an eye out for the next time I’m driving by some cotton fields :)