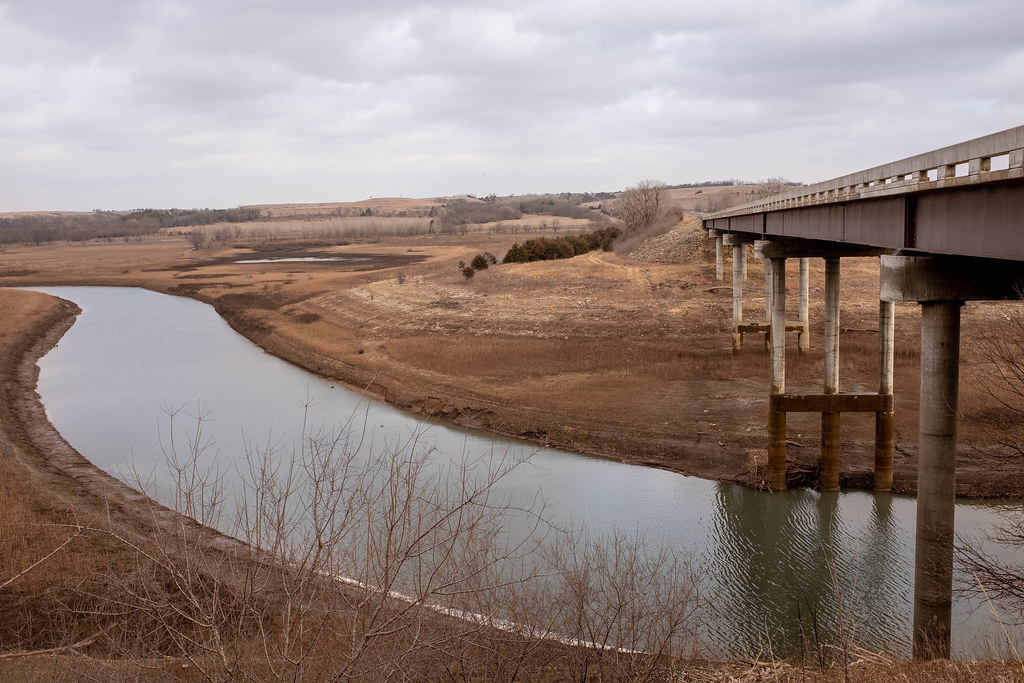 I’m not kidding, that’s literally the name of this waterway and I have always thought that this scene would make for an interesting photo opportunity, but I’ve never really had the time or gear or weather conditions to get this shot. I’ve driven over this spot a dozen times in recent memory and I have a hunch that this is all that remains of a once-great reservoir, much like Milford Lake just to the south, but that has now been returned to a state that resembles, more or less, how it might have looked long ago with a small stream cutting a meandering path through the Kansas wilderness.

As I was driving from Nebraska to Oklahoma in early February I knew that the weather would be good enough for me to at least pull over and see if I could get some type of shot here, but I wasn’t quite sure just what I was going for. I knew I would want something on the wider end of the spectrum so I grabbed my Fuji X100F, got out of my car, and made my way to the edge of the bluff you see in the foreground. I fired off a couple shots but something wasn’t quite working out and I wasn’t able to put my finger on it…and then I realized was going on. It was the curve of the river.

This shot, much like most of my images up to this point, didn’t do a good job of capturing the scale of the scene because the river just sort of wandered off the frame without going into the distance. It just wasn’t working, but I wasn’t really sure what to do about it. Kind of on a whim I decided to move even closer to the edge and also scoot up to the bridge a little bit too, so it didn’t take up quite as much room in the frame. The result is the picture you see at the top of this post, and it’s very close to what I’ve been seeing in my mind whenever I’ve thought about getting a photo of this location. Not much is different between the two pictures you see here–both have a bridge on the right, a river in the middle, and roughly the same horizon–but the one on top does such a better job of capturing the expansive nature of the scene.

I’d like to revisit this when the grass is greener and the sky is bluer, and hopefully use what I learned here to get an even better shot someday :)