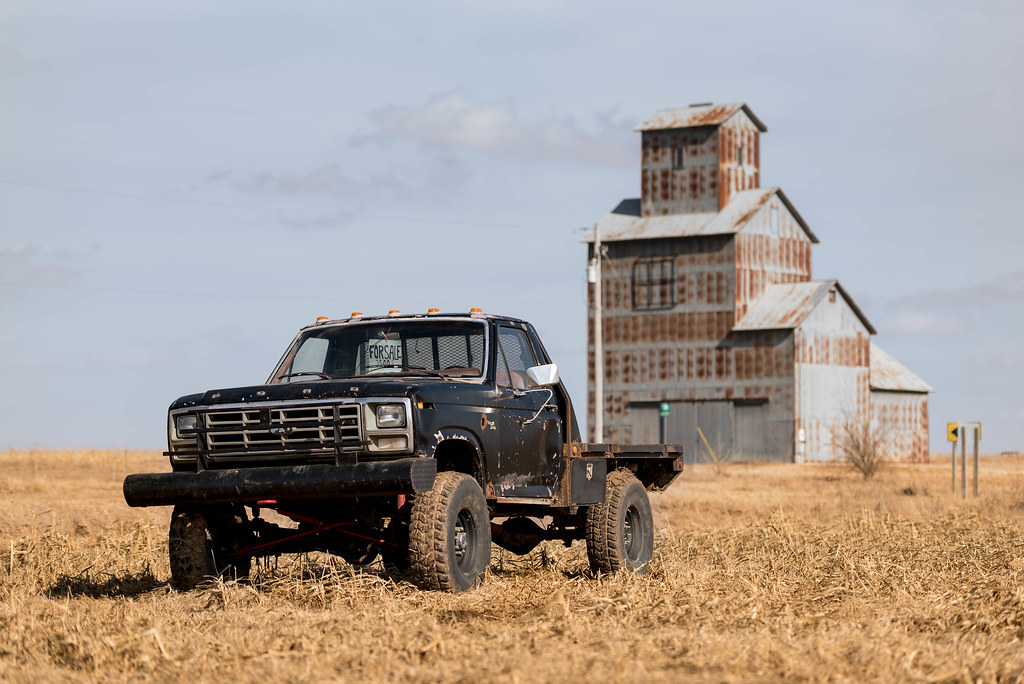 I’m really not sure what to make of this image, to be perfectly frank. I was, once again, driving south on Highway 77 (side note: this is the last in a series of photos that I took while on a drive to Nebraska and back earlier this year) when I went right past this truck sitting by the side of the road with a For Sale sign hanging from its rear-view mirror. Something about the scene just caught my attention and I decided to stop for a picture, though I couldn’t quite explain why. Maybe it was the well-worn nature of the vehicle, a truck that had worked hard and served its owner well but was ready to move on to another stage of its life. Maybe it was the way the metal structure behind it rose like a stairway into the sky. Maybe it was the brown, earthy tones of the ground that seemed to match the well-used nature of the truck. Whatever the reason, I decided to stop and get a picture because…well, why not :)

Composing this picture was a little tricky because I really wanted to shoot the truck low to the ground and from this specific angle, which meant I was kind of stuck with whatever background elements were in the frame. I couldn’t move anything but myself, though I could (and did) change focal lengths on my 70-200mm lens which sort of helped, I guess. I ended up shooting this at 98mm with an aperture of f/2.8 to get a little bit of blur in the background but I wasn’t, and still am not, quite happy with the placement of the truck relative to the structure. I wish I could have separated the two a little more, but if I moved to the left then the truck ceased to be at this particular angle and that was a sacrifice I wasn’t really willing to make. I also wish the green street signs and yellow arrow (which you can only barely see anyway, since it’s obscured by another sign) weren’t in the picture but…well, what can you do.

Pictures like this might evoke some particular sentiments about the midwest, and while some of them might be true the irony is that things really aren’t like this around here. Sure we have our share of plains and cornfields and old trucks and whatnot, but a few months from now this composition will look entirely different. You would see a scene full of life, vibrant and colorful, with a blue sky stretching to the endless horizon. Sure there are signs of the past if you look for them, like an old truck or a rusty three-story pole barn, but just underfoot you’ll find plenty that points to an exciting future too.