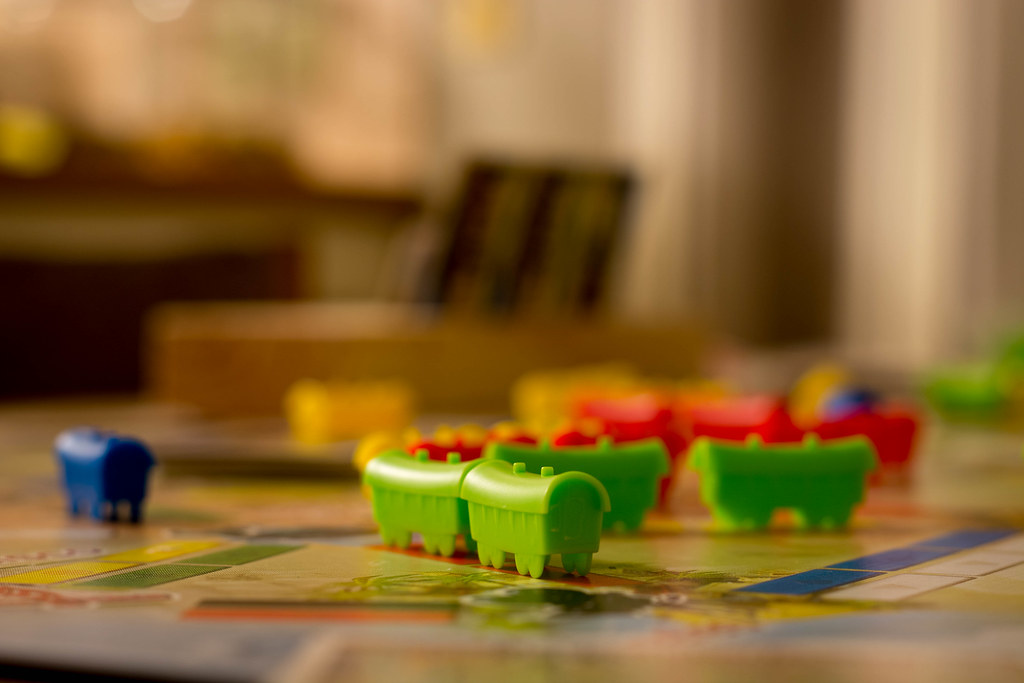 If you’ve been following along the last few weeks you’ve seen that the recent set of pictures has had a distinctively midwestern theme, with images of windmills and trucks and cotton and other items indicative of the Great Plains. This picture is a departure, or rather, a return to the more normal types of photos I enjoy taking. It’s a simple scene and, like a lot of my Weekly Fifty photos, entirely unplanned with what I hope are some interesting results.

On a Friday evening earlier this year my brother and his girlfriend were down for a visit, and we spent a while playing the board game Ticket to Ride with our kids. It’s kind of like a super duper basic version of Settlers of Catan in that you have to connect various regions on a map with roads or, in this case, train routes. We didn’t quite finish the game since the kids had to go to bed, but we left it out for the next morning which seemed like a good compromise for everyone. After waking up and making my way to the kitchen the next day I thought that the colors of the trains, lit by the glow of the early morning sun, would make for an interesting photo but instead of reaching for my Fuji I went for the classic Nikon + 50mm. I’ve said it before and I’ll say it again…something about that lens is just kind of magical. It’s not what I prefer for general-purpose everyday shots, but it’s amazing when you want to get a little artistic and creative.

So I set the camera on the table, dialed in an aperture of f/2.8 (I knew f/1.8 would be waaaaaay too big and leave almost nothing in focus) focused using Live View, and took a shot. Sure enough, even at f/2.8 the depth of field was too shallow so I closed it down to f/4 and left the ISO at 100, which meant I needed a super long shutter speed of 1.5 seconds. No matter, though. Just set the self-timer, press the shutter, take your hands off, and you’re good to go. (Sorry for my use of the second-person pronoun. Sometimes it just works better.) My oldest son, who was awake and watching me take this picture, was eager to get going with breakfast so I quickly put the camera away and set about taking care of some of the usual morning routine activities, but it was nice to get a shot of this almost-completed train route before everyone else woke up and the moment faded away.