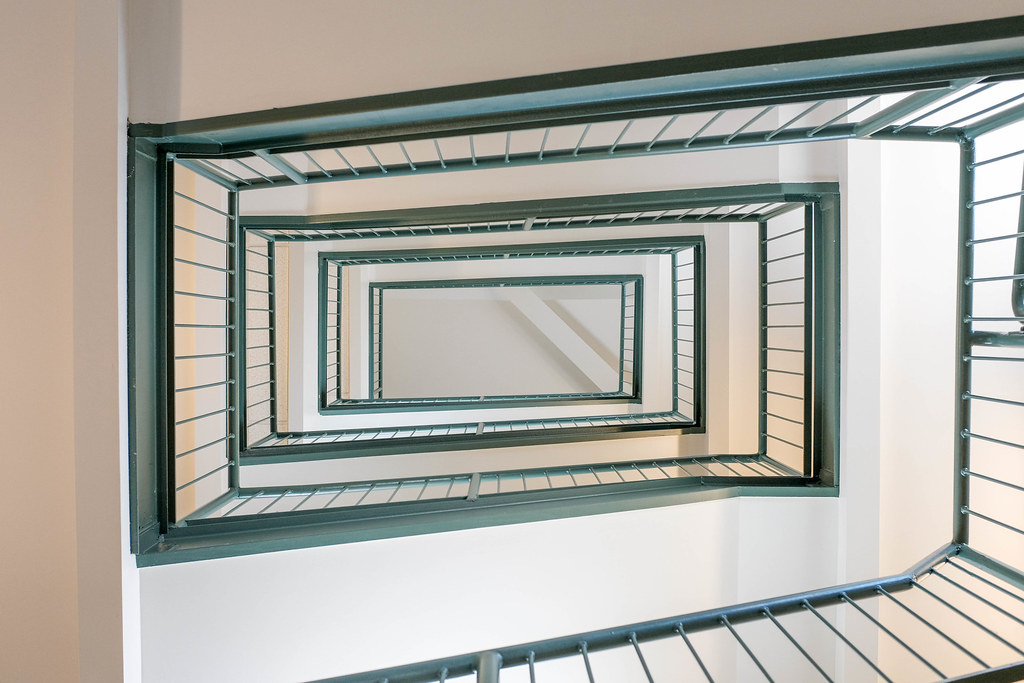 Nearly six years ago I took a picture similar to this in Willard Hall on the OSU campus, and in the time since then I haven’t really thought much about that original image. But when I found myself in a similar situation, that of being alone on an errand and in one of the stairwells at Willard Hall while toting a camera, a few months back I decided to stop for a minute and see if it would be worth re-taking the same type of picture. And you know what? I’m glad I did.

When I shot the original I had my Nikon D200 and 50mm lens, which not only meant that the field of view was extremely limited compared to my Fuji X100F (which I used to shoot the picture above for this week) but I couldn’t even see what I was shooting. The D200 doesn’t even have Live View which meant I had to basically compose the original shot with guesswork while holding the camera out with my arm. It was a little weird.

When I was back in Willard with my X100F I took a different approach, and it’s interesting to compare the results. First, I was at the bottom of the stairwell instead of the top. Second, I literally laid down on the floor flat on my back. (I shot it over Spring Break when there was almost no one in the building. Because I imagine the scene would have looked a little strange.) Third, I had the benefit of being able to properly compose the shot by actually looking through the viewfinder! I also was a little more knowledgeable about exposure settings, specifically the aperture I was using, which meant I was able to control depth of field much better.

I don’t think the final image is edited at all, save for maybe just a bit of cropping (I honestly don’t remember) but I think my favorite part is the diagonal shadow at the top going across the right side of the rectangle. The ceiling, to be specific. I like the monochromatic nature of the image, the play of light and shadow, and the way that diagonal juts across the open space to create something a bit more interesting to look at. I don’t imagine I’ll take another picture like this anytime soon, but it was a fun little photographic opportunity and one that made me really glad I was looking at the world around me with an eye for photography :)