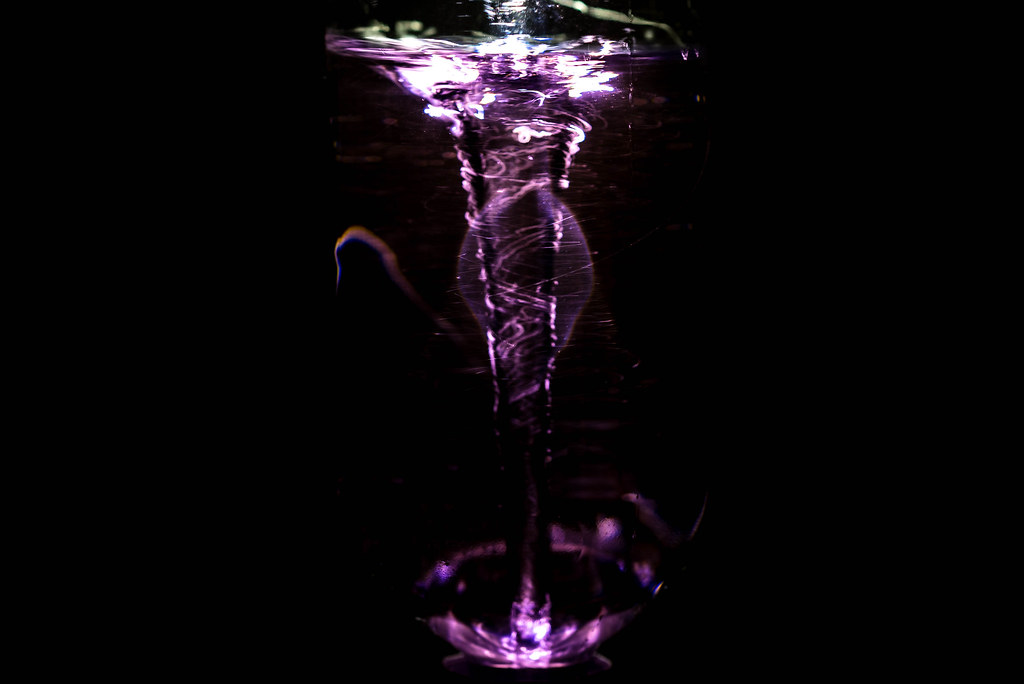 This photo came about after a few days of my wife and I doing somewhat of a science experiment with our kids involving the classic tornado-in-a-bottle project. We spent an hour or so on a Tuesday afternoon, thanks to a city-wide weather-related school closure, putting a few of these together to bet with somewhat mixed results: the mini-tornados functioned normally but the containers were a bit leaky. The next day we revised our design, primarily using hot glue as an adhesive between the bottles, and things were significantly improved such that we couldn’t detect any leaks at all despite some significant usage by the kids including dropping one of the contraptions onto the kitchen floor. It was a fun way to spend a couple of hours, and the kids really seemed to enjoy creating whirling vortexes in these bottles for a lot longer than I thought they would.

Later that evening as the sun was going down but before the kids went to bed I had the idea of using one of the bottle experiments as a photo subject, but I didn’t really know what to do or how to photograph it. I got out my D750 and 85mm lens, mostly because it was convenient and readily available and I needed a bit more reach than my 50mm but wanted to avoid she sheer heft of the 70-200mm. I put the camera on a tripod and aimed it at the kitchen table with the bottle in the middle, just like you see here:

The trick here was lighting. I didn’t really know what to do to properly light the scene, so I started with a 2500 lumen LED shop light sitting on a chair and pointed up at the bottle from behind. I also didn’t really know what exposure settings to use except that I wanted a slightly long shutter and a low ISO, in order to get some motion trails and a nice clean shot. As such I used manual mode, ISO 100, F/2.8, with a 1/60 second shutter speed. The results were…not good.

I played around with the light a little more though, firmly thinking that a big strong backlight would give me the look I was going for, while also stopping down my aperture to f/4 to get a wider depth of field. I did this because it was tricky to get the bottle to sit on the exact same spot on the table every time I turned it over, and I needed a bit of wiggle room in case I didn’t get the placement just right. Things improved, but not very much.

At this point I was really wondering what I was doing wrong, and then I realized that my light was simply too bright. I switched out the shop light for a flashlight with an angled head, set that on the chair, lowered my shutter speed to 1/10, and got the picture you see at the top of this post. After that I kept on trying new settings like smaller apertures and longer shutter speeds just for the fun of it, and while some of those photos turned out OK nothing was really any better than the image I chose for this week’s featured photo. It was a fun experiment to try though, and gave me some interesting ideas to try for future pictures too.