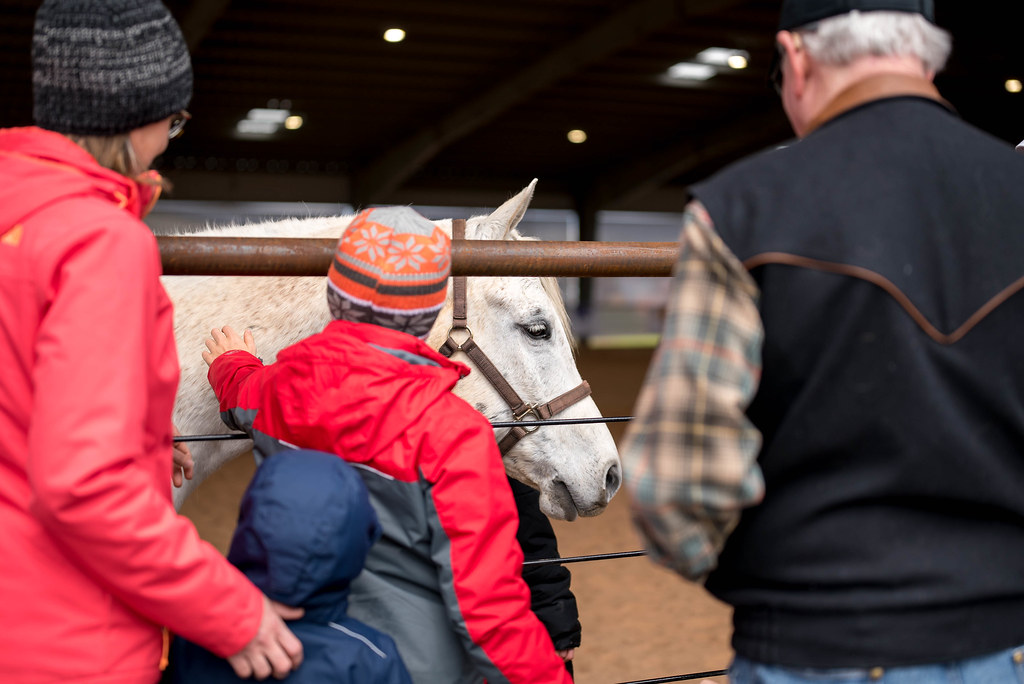 Here’s the final picture I’ll be sharing from my time with the Sigma 40mm f/1.4 ART lens, and I chose this one for a reason. It might sound corny, but I don’t think I could have gotten this particular shot with any other lens. But first, a bit of background: this was taken at the Big XII Equestrian Championship held at OSU back in late March, and even though OSU ultimately lost (but not by much!) we were glad we could go out and support the riders who had worked so hard to get there.

After one of the events one of the riders, who was a student in my wife’s class, brought her horse up for our boys to see up close. Normally I’d have my Fuji X100F for times like this but since I was evaluating the Sigma lens I brought that with me instead and even though I wasn’t exactly used to its sheer size and heft, I got some shots such as this one that I really like. What I find most compelling about this image is the way the horse is tack-sharp, especially its eye, but everything in the foreground and background is blurry to some extent. As the viewer your eye is immediately drawn to the horse but then you start to notice other elements like the man’s plaid shirt, the younger child in a blue coat, and context clues such as the overhead lights and the fact that my wife is wearing a hat. It all comes together to paint a richer picture of the entire scene than if it were just the horse by itself, and when you add in the fact that my oldest son is reaching out to touch the horse it’s kind of the cherry on top.

So why couldn’t I get this shot with any other lens? The options I had at my disposal were:

I’m not counting my 85 or 70-200 because I wouldn’t even think to bring them to a situation like this; they’re just not practical. And with each of those lenses I wouldn’t have been able to get the shot framed quite like this while also getting the foreground out of focus. The background, sure. But not the foreground. The closest might have been my 35mm lens but even at f/1.8 the man’s shirt (which I really like, by the way. The plaid pattern is just buttery smooth when blurred out) would have been too much in focus. If I used my 50mm I would have had to stand farther back to get a similar composition and then, as you might have guessed, the foreground wouldn’t be as blurry. Something about the 40mm focal length just worked ideally to capture this image, and even though I don’t plan on ever purchasing that lens (At $1300 it’s just too expensive) it sure does give photographers some interesting creative freedom.