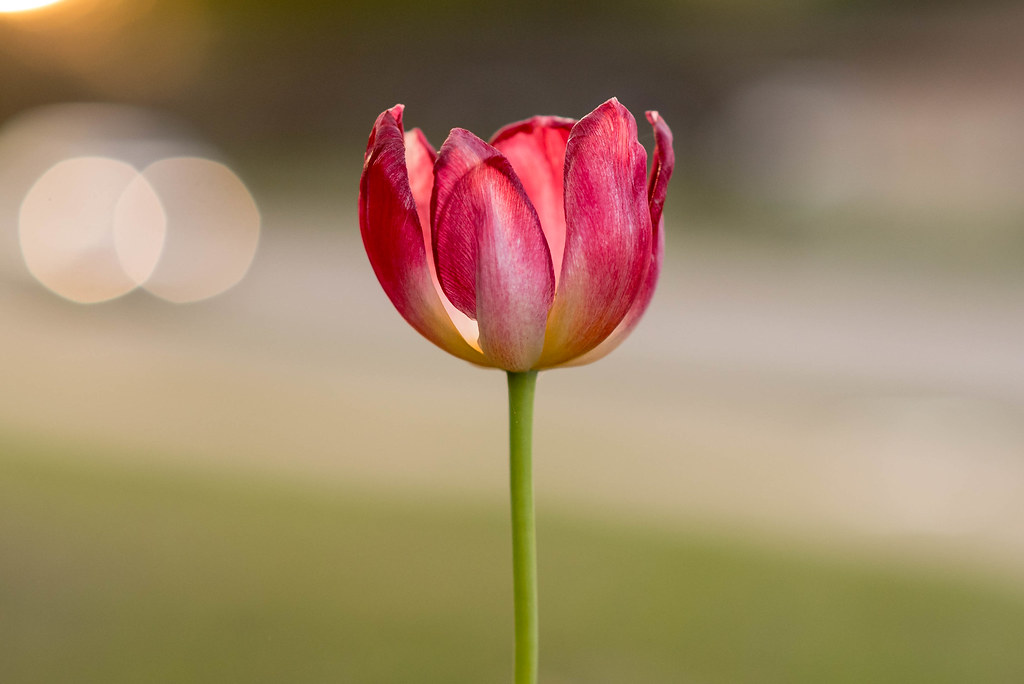 In last week’s post I wrote about how the flower photo which was showcased came about as a result of a short drive down the street with my niece to experiment with, and learn more about, photography. This picture also came from the same event, and it’s also an illustration of how sometimes people can see things that you might not notice even though they are right in front of you.

After my niece and I spent about 20 minutes taking pictures of purple tulips we got in my car and drove down the road a little ways to see if there might be any other scenes worth photographing. The sun was rapidly descending on the horizon and after going about a half mile and coming up empty I turned around in a parking lot and we headed for home. That’s when she spotted this lone tulip poking up in the middle of a boulevard, all by itself, and excitedly told me to pull over so we could get a shot. I didn’t even realize this flower but she had no trouble spotting it, so I found a safe spot to park and we ran over to see if we could get any pictures before we lost all the light we had.

As we looked at the scene from different angles and played around with different apertures (She had my Nikon D7100 + 50mm lens, I had my D750 + 85mm lens) I noticed something that we could use to our advantage despite the quickly-dimming sunlight: headlights from passing cars. I showed her how, by getting close to the flower and shooting wide open, she could transform headlights into big blurry balls of orange and yellow. You can see the effect in the photo above, which is quite pronounced even when shooting at f/2.8 instead of f/1.8, and it was neat seeing her eyes light up when she realized that these effects were a result of controlling her camera, not adding a filter on her camera. Not that there’s anything wrong with the latter method, but sometimes it’s just kind of neat to learn that you can do it yourself :)