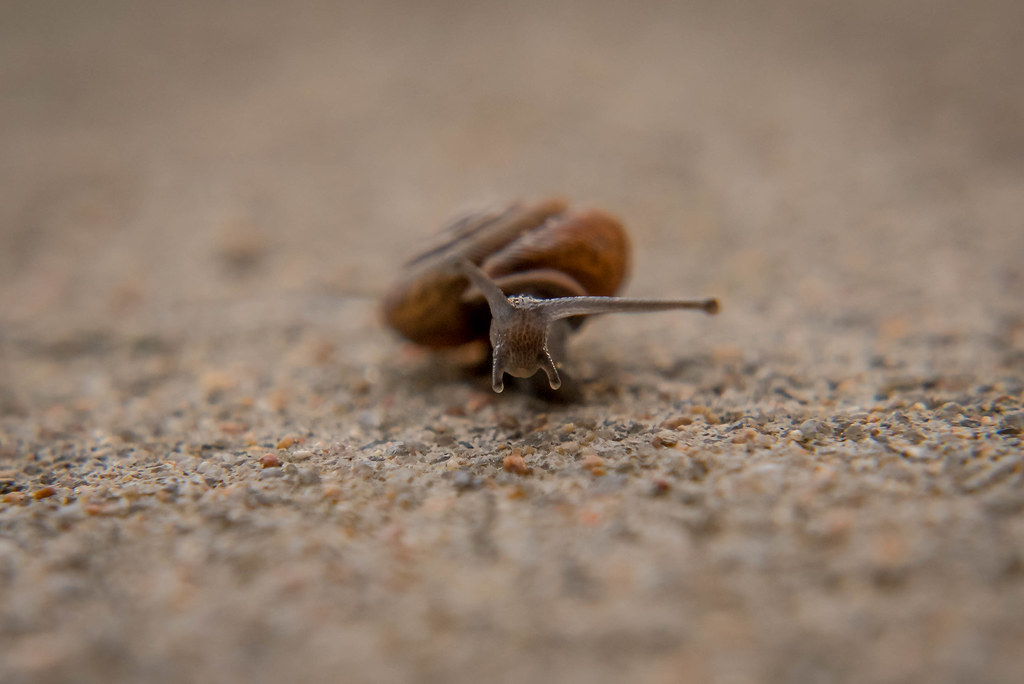 Once again I have my friend Gina to thank for this photo, who has given me several other picture ideas over the years and whose input I always appreciate having when it comes to photography. With all the rain we had this past spring there were all sorts of animals around that we don’t normally see, or perhaps just don’t notice, especially the creepy crawly variety. As we were chatting at work one soggy morning in May she asked if I had my camera with me and suggested that I go out and take some pictures of snails that were hanging around on a particular sidewalk near our building. I didn’t, but I thanked her for the suggestion and the very next morning I showed up with my Nikon D750, 50mm lens, and (you know it) my set of close-up filters to see what I could find.

Sure enough, I soon found a whole rout of snails so I got out my camera, attached the +10 filter, and set to work. The first thing I realized is that height was definitely going to be an issue: my camera was too far off the ground to get a really good look at any of the snails head-on! I would have liked to get some shots that were more at eye level, but that wasn’t really an option given the equipment and time I was working with, so I made the most of the situation anyway. I don’t normally use my +10 filter because it’s just too close for most situations I encounter, but it proved quite adept at capturing pictures of snails. I was able to get really close to this one, and others, and shot with a fairly small aperture of f/8 to get a wide enough depth of field so you could actually see what was going on. And even then, as you can see in the picture, the total in-focus area was only as wide as a few grains of sand! Thankfully these snails moved really slow or else it would have been a total wash.

At one point I went so far as to pick up one of the snails, set it on a leaf a few inches off the ground, and wait for it to come back out of its shell for a photograph. Sadly it did not oblige, though I can certainly understand its trepidation, and the best I could get in that scenario was a picture its shell sitting on the leaf:

While this picture was a little more colorful it was also a lot less lively, and in the end I decided I would rather have a photo that shows the actual snail and not just its portable abode. But who knows…one day maybe I’ll get a picture that does both :)