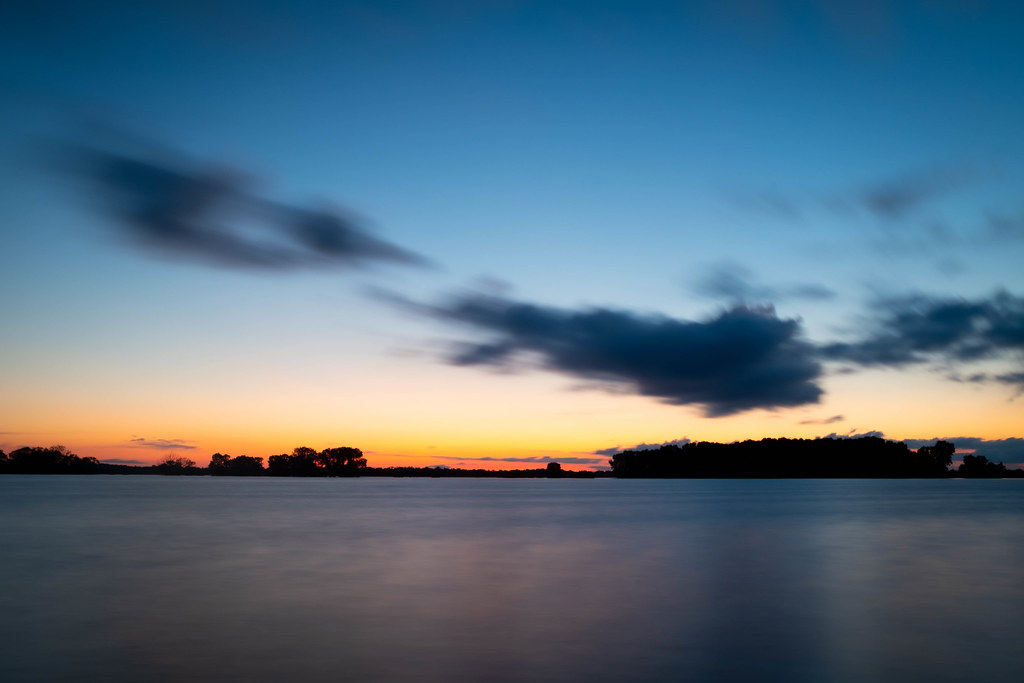 This is the second in a series of long-exposure sunset pictures I’m sharing here on Weekly Fifty. I shot this at Milford Lake on June 23, 2019.

After I shot a sunset photo on the night before this, I had a better idea of what kind of image I wanted to capture as well as what settings I might need in order to do it. To get this picture I walked to the west edge of Acorn’s Resort about 9pm, found the spot I wanted, set up my tripod and camera, and waited. My mom was with me at the time and I was trying to describe the photo to her that I was attempting to get, and she was clearly having some trouble wrapping her mind around it because I kept telling her I needed less light.

“But don’t you need light to take a picture?” she asked, a little confused.

“Yeah, but in this case I want less light so I can leave the shutter open longer. That will make it look like there’s more light.”

To which she had a quite logical response: “Why not just take your picture now before the sun goes down?” I tried to explain it to her but without actually showing the end result it was a little tricky. Eventually, she went back to the cabin and I settled in for some long exposures. I set my Fuji X100F to 30 a 30-second shutter, f/16, and activated the ND filter while I waited for the meter to read 1, 2, and then 3 stops underexposed.

I eventually got to the point where I was able to take a nearly four-minute exposure, which I thought would look aaaaaaawesome and have the water super silky smooth. Well, I was right about the latter but not the former. True, in my 4-minute exposure the water was polished to a mirrorlike shine, but the photo just wasn’t that interesting to look at. The issue, I realized, had to do with the sky.

In this 30-second exposure, which I took almost as a practice picture while I waited for things to get really dark, you can see a mass of clouds moving that gives a sense of kinetic energy to the frame which was almost entirely gone in later pictures. Soon after I took this picture the clouds blew away leaving the sky a deep, empty blue. The water was smoother but the resulting image felt dull and lifeless, especially compared to this particular shot. It felt strange, but despite my efforts to capture a super long exposure I ended up preferring this one by a wide margin.

Funny how things turn out sometimes, isn’t it?