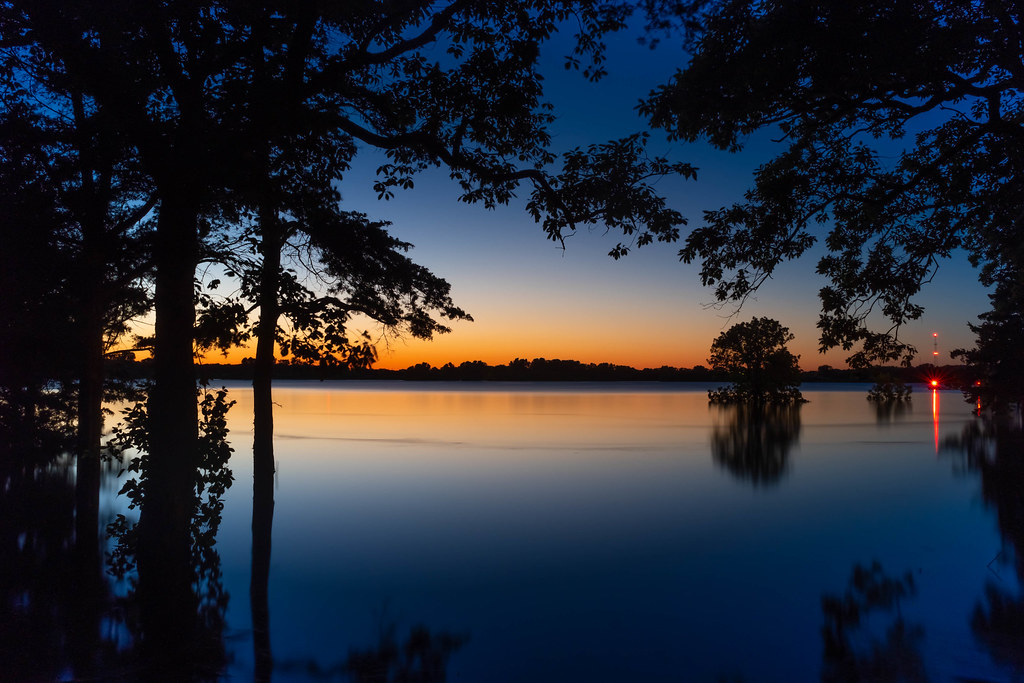 This is the third in a series of long-exposure sunset pictures I took at Milford Lake in June, 2019.

Alright, first things first: I know this isn’t Sunset Cove. The real Sunset Cove is located on Cass Lake in northern Minnesota and it’s where my extended family went for a week each summer from roughly 2000-2012, give or take. That being said, the name seemed quite à propos for this week’s photo give that there is both a sunset and a cove.

The fun part about taking this particular photo was that there was basically no wind at all, which meant that I could leave the shutter open for a good long while and still get perfectly sharp leaves, twigs, and trees. In setting up the image I used what I learned from the two previous nights as far as metering, time of day, height from the surface of the water, etc., and I was also quite careful to place my camera in such a way that the various components of the image (such as the tower on the right and the tree sticking out of the water just to its left) were right where I wanted them to be. I focused manually, as on the previous images, which made me really appreciate the X100F’s ability to use focus peaking.

I used similar settings too, such as f/16, ISO 200, and a 30-second exposure to get the metering right before switching to Bulb mode. To get this shot I left the shutter open for almost 3 minutes and even in that time you can see how little movement there was in the trees, as each leaf is basically tack sharp. Even though this picture doesn’t exactly show the sunset, which was out of the frame on the left side, it still clearly shows a warm orange glow as the sun worked its way down and the cool night air began to settle in.

This was a fun way to end our annual trip to the resort, and a good reminder of what was really important: family. I purposely didn’t spend too much time here taking the photo, and as soon as I got this shot I ran back to the cabin to play cards with my wife and siblings. Because all the pictures in the world aren’t worth a good night of cards, chips, and queso dip with family.

Side note: For reference on how full the lake was this year, here’s a shot from roughly the same location in 2013. Everything you see in the foreground was completely underwater.