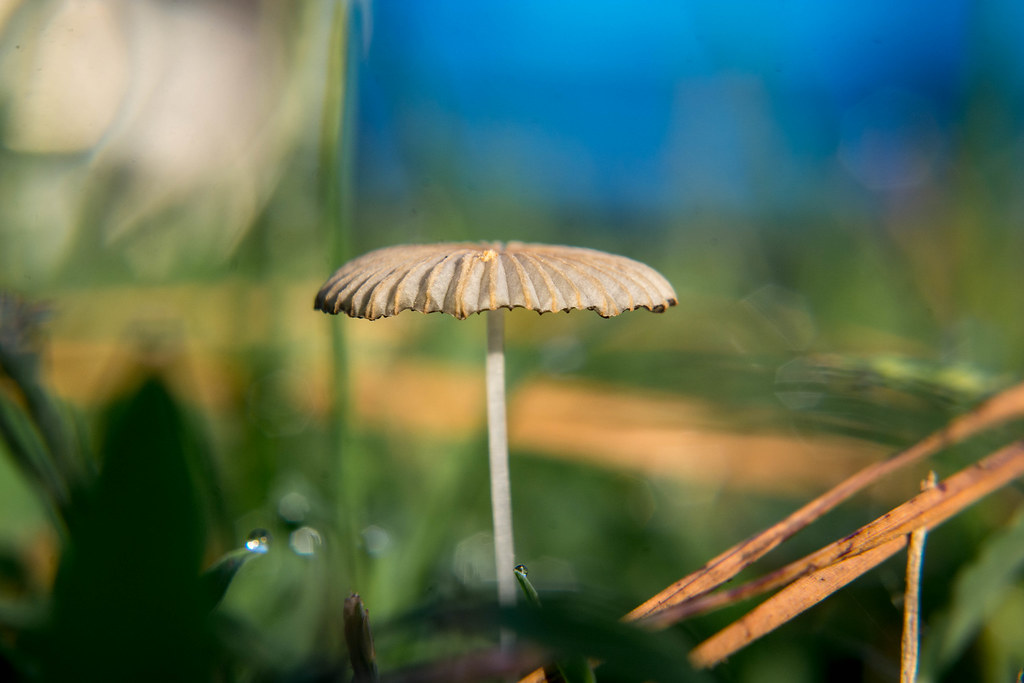 Some days you’re in the right place at the right time, and that’s definitely what happened here. This was on a hot Sunday morning in mid August and my wife and I were doing our best to shoo the kids outside, load them in the car, and head off to church without being too late. The boys and I made it out to the driveway while my wife was wrapping up a few last-minute things inside when I spotted this tiny little mushroom right next to the driveway. The top was no bigger than a dime, and with the sun poking over the horizon (as well as our departure for church being imminent) I ran through a couple scenarios in my head: ignore it and go about my day, grab my camera, or hope it was still there after church.

I chose Option 2, and ran inside to grab whatever camera my 50mm lens happened to be attached to. Turns out it was my D7100 which was fine, even though I like the tilt-up screen on my D750 for low-to-the-ground shots like this, but I didn’t want to take 30 seconds and switch lenses. The clock was ticking! I quickly screwed my +10 close-up filter on to the lens and ran (literally) back outside to see if I could grab a picture before it was time to leave.

I knew that shooting with a +10 filter was going to be a bit problematic in terms of depth of field, and I also knew I had to think quickly about composition and lighting, so I didn’t get to sit and ponder this shot as long as I would have preferred but I think it turned out fine in the end. I took a few shots at f/8 and then, after reviewing them on the camera, realized that I’d need an even smaller aperture to get enough of the mushroom in focus. I stopped down to f/11 and, since I was using Aperture Priority with Auto-ISO and a minimum shutter speed of 1/200 second, ended up with ISO 400 which looks great on a D7100. My boys helped me with picking an angle to shoot from and as luck (or perhaps divine intervention) would have it we got a few more shots, hopped into the car, and made it to church before the opening hymn.

After we got home my kids and I reviewed the shots and I found this one to be my favorite, partly because of the lighting but partly because of the blue in the background that helped the mushroom top to really stand out. It’s quite similar to another photo I posted earlier this year with a similar blue color in the background which, in both images, is our 2007 Toyota Matrix. Originally I didn’t really like the idea of my car in the background but after looking at the picture closer, especially on a smaller screen, I thought it did a real nice job of bringing out the subject in the center. I think the bright spots and dew drops in this other image are visually compelling as well, but the mushroom blended in a bit too much with the streak of yellow in the background.