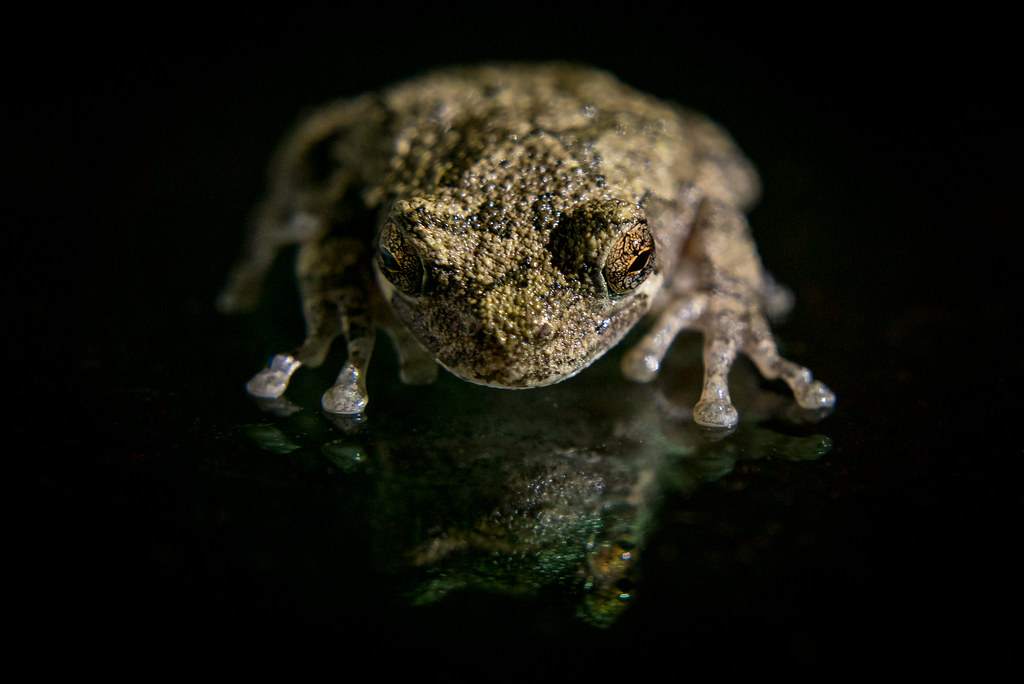 Every now and then after it rains we get toads crawling up the glass door on the back of our house, and it’s fun to go out and take their pictures if circumstances allow. I’ve put one or two of these images here on Weekly Fifty in years past, but this one is markedly different because it was the first time I shot one with a close-up filter. I got the idea from my brother Phil who, the day before, showed me some pictures of a cicada shell in his back yard that he shot with a +10 filter on his 35mm lens. He used a tripod to get the shot just the way he wanted and it turned out beautifully, so when I saw this frog perched on our back door at 10pm after a rainstorm I thought I would borrow his technique to get a picture.

First of all, you might not be able to tell from the picture but this toad is in fact vertical, not horizontal. It’s about a foot off the ground on our glass door, staring up at the porch light. My wife noticed it as we were on our way to bed because she could see a toad-shaped silhouette on the door, so I went outside with my Nikon D750, set of close-up filters, and a flashlight. Initially I tried some shots with the +4 filter but I couldn’t get close enough to the toad to really get an interesting shot. I also didn’t know how to light the creature, which was turning out to be problematic. After some experimenting I ended up setting the flash light on our barbecue on the other side of the porch and aiming it directly at the toad, which gave it a nice glow from one side.

Then I took my camera and pressed it against the window to hold it steady, and took a few shots with the +10 filter. I had to use Live View because there was no way I could get my eyes in the right position to look through the viewfinder, and focusing was a bit tricky also. I ended up focusing manually and literally moving my camera up and down against the pane of glass until the eyes of the toad were sharp. Live View enabled me to zoom in as I was doing this in order to check focus, and I shot this at f/8 to get a good balance between shutter speed and depth of field. Even then I had to use a 1/90 second shutter which isn’t all that fast, but by holding my camera against the glass I was able to steady it enough to get a decent shot.

This was a super fun picture to take and I’m enormously proud of the result, having never taken anything like it before. So Phil, if you’re reading this, thank you for the inspiration :)