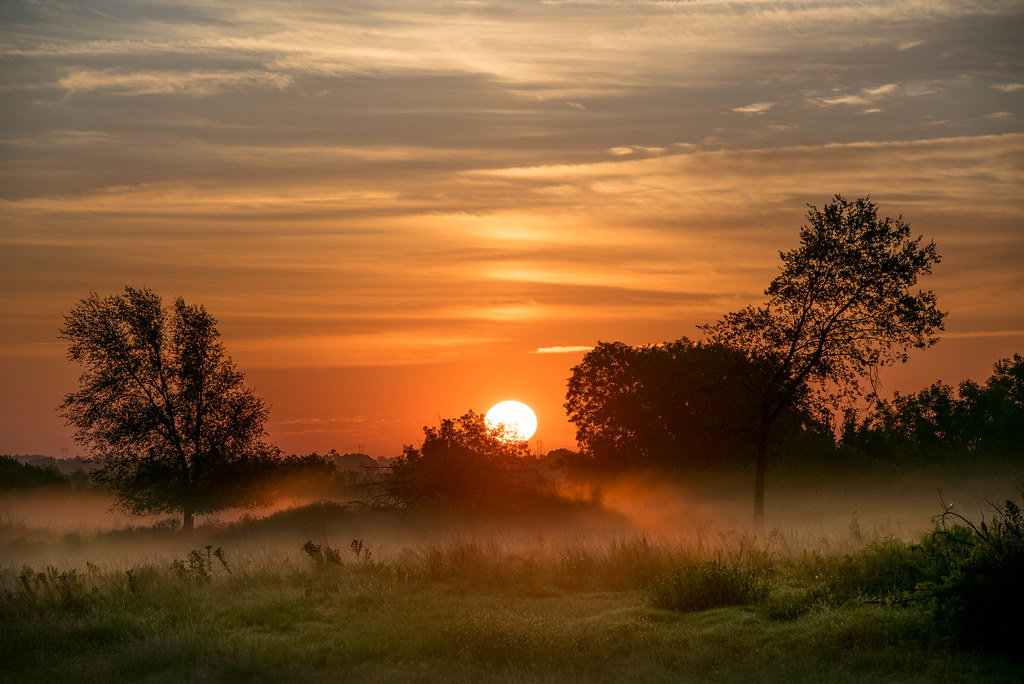 I don’t really know how I got this shot. I mean, I know how I got it in a mechanical sense, but the fact that I was standing right in the middle of a venn diagram consisting of so many disparate elements still kind of boggles my mind.

I leave for work about the same time each morning: 7:10 to 7:15am. That means twice a year there is a window of about one week where I have the opportunity to get shots of the sunrise, barring any atmospheric troubles like stormy or overcast skies. On the morning of September 19, 2019, I could see a bit of fog left on the ground as the sky turned from black to gray while I was getting ready for work, so after hugging my wife and kids I grabbed my Nikon D750 and 70-200 f/2.8 lens to see if I might be able to catch something in the way of a foggy scene on the way to work.

Normally I bike to work but on this morning I had to drive, so used the opportunity to turn east out of my driveway instead of west. Two blocks later I was looking out over a field on one of the north/south streets that passes along the edge of town, and I pulled over to get this shot of the fog hovering around the low-lying grassy areas.

I didn’t really know what type of picture I was going for but this seemed fine, and I was glad I had the chance to capture this scene right as the sun was coming up. So I got in my car and went on my way only to pull to an almost-screeching halt about 100 yards later. On my left was one of the most beautiful sunrises I could recall seeing, partly because of the brilliant oranges reflected on the clouds but also because of the foggy mist in the foreground. I ran across the street with my camera in hand, dialed in a few settings, and started shooting.

I zoomed in all the way to 200mm and shot at f/11, ISO 100, but even then the sun was so bright that the picture was overexposed and I knew I’d never be able to recover enough highlight information to get a good image. Rather than adjusting my settings manually (I almost always shoot in Aperture Priority with Auto-ISO) I dialed in a -2EV exposure compensation which got me just the right image. The foreground was almost completely black but the sun and the sky were properly exposed, and then with a little fiddling on the RAW file in Lightroom I was able to get just the right end result. Not a minute later and this scene was entirely gone, with the sun too far up on the horizon and the fog beginning to clear, and I was so incredibly grateful I was able to get the opportunity to shoot this. It was a good reminder that God’s mercies are new every morning, and a good reminder to thank and praise Him for each day we have on this earth.