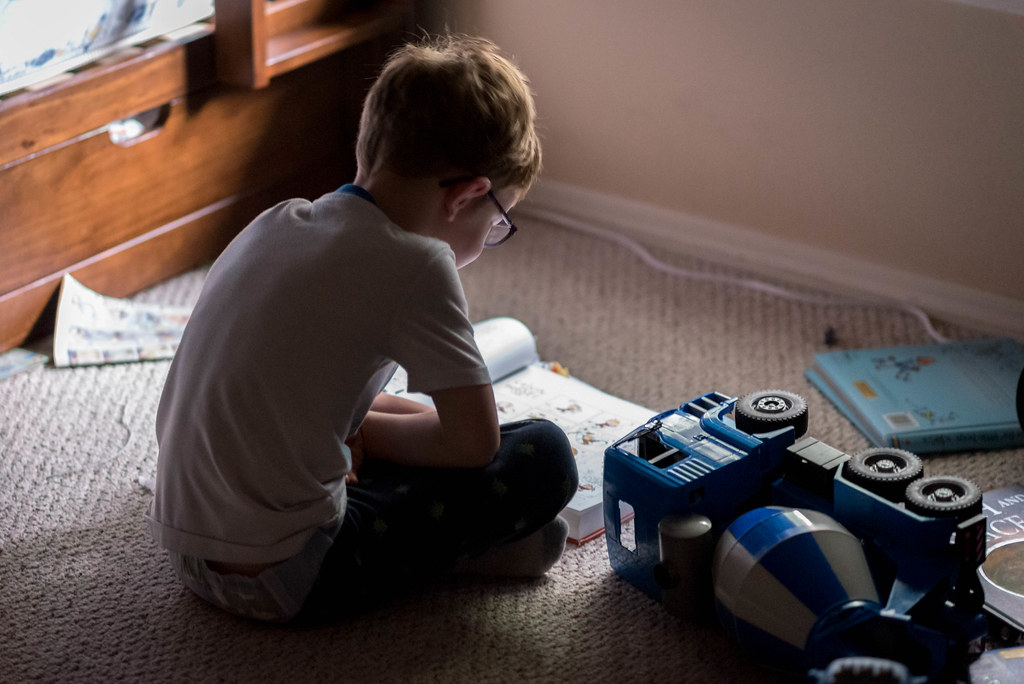 One of the reasons I don’t share pictures of my kids on Weekly Fifty is because I want these pictures to be about the art and craft of photography, not a way for me to show off or draw attention to my family. Even when I do have pictures of my kids I don’t show their faces partly because I like to keep the focus on other elements of the picture, but mostly because at heart I’m still one of those paranoid Xennials who isn’t quite comfortable sharing photos of his children for the whole world to see. This one, though, I thought was worth putting up.

When I was a kid one of my favorite comics was Calvin and Hobbes. I remember reading it religiously in the newspaper each morning, laughing at the zany antics of the yellow-haired six-year-old and his tiger friend, but entirely missing the deep layers of subtext and social commentary hidden just beneath the surface of the pen-and-ink drawings and words of dialogue. Several years ago my wife’s parents bought me the Complete Calvin and Hobbes, a boxed set of every comic ever written as well as several pages of introductory text from the author Bill Watterson, and it has held a special place in my heart ever since. I read the set through a few times and kept it safe and sound, hoping that one day my own kids might get just as much enjoyment out of it as I did when I was young.

I don’t remember when my oldest son, who is now 8, took an interest in those comics but he took to them almost immediately, burning through all three books in a matter of about two weeks. He has re-read them several times over the years, and most nights he lugs one of the books up to his top bunk and ends his day chuckling at the situations Calvin and his tiger find themselves in while his little brother slips off to sleep below. Like most siblings, the younger one often follows in the footsteps of the older, and even though he can’t read he loves looking through the books nonetheless and gleaning bits of story from the exaggerated images on the pages. That’s what I found him doing on this morning when I wondered why he wasn’t up yet before I left for work. I quietly peered through his bedroom door only to find that he was he was awake, just reading Calvin and Hobbes quietly to himself in his bedroom.

Knowing that these moments can pass so quickly and with little warning, I ran as fast and as quietly as I could do get my Nikon D750 and affix the 85mm f/1.8 lens so I could get a picture of my youngest son lost in his own little world of adventure, excitement, and animal-assisted interplanetary exploration. The light was so dim I knew I would need all of it that I could get, so I shot at f/1.8, ISO 6400, and even then I settled for a 1/20 second shutter speed. The only reason it worked was because I was able to rest my camera on the door frame, otherwise the end result would have been too blurry from camera shake.

As soon as I shot this picture the moment was lost, since he heard my camera shutter and immediately turned around to see what was happening. (Something that wouldn’t have happened if I shot with a mirrorless camera like the Sony a9, but that’s an issue for other websites to explore.) He looked up with a huge grin on his face, and went back to reading. I went back to breakfast, also with a big smile, thinking that it was going to be a good day. And it was.