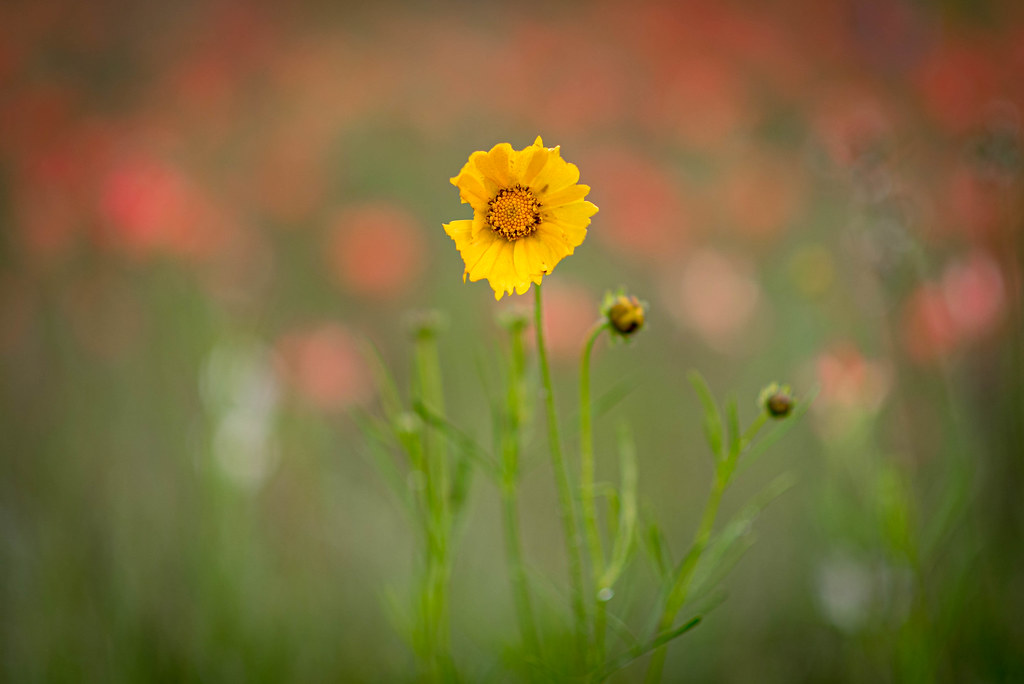 I went back and forth on whether to use this as a Weekly Fifty photo, ultimately deciding to go with it even though I’m not really all that fond of the image. I shot it a few minutes after this one which I like much better, but on reviewing my Lightroom library I just couldn’t quite move on from this image despite my misgivings about it. I shot it with my 85mm lens though it would probably look much the same with a 50mm, and I think one reason I’m not all that happy with the resulting image is because it looks like the yellow flower is just sort of…floating in space. Shooting at f/1.8 on an 85mm lens leaves very little room for error when depth of field is concerned, and here you can see that even though the stem of the flower is mere inches (if that) behind the petals, it’s almost entirely blurred out due to the razor-thin DOF. To me, the resulting image just isn’t all that interesting compared to what it might have been if I shot at a smaller aperture.

Something about the image of a yellow dot hovering as if in midair against a sea of green and red remained oddly compelling. I can’t quite put my finger on just what is interesting to me about this picture, but on second, third, and fourth look I started to appreciate something about it. It was shot just a few minutes after the other one I mentioned, and I think the combination of the yellow petals and red spots and even diffused lighting made for a scene that was much more than anything I could have created on my own if I set out to take a picture. And maybe that’s what I don’t quite get: I wouldn’t have just gone over to the neighbor’s field and shot this photograph on any normal day. It just wouldn’t have occurred to me, because it seems like a boring subject to look at. But the reality of the situation turned out to be a lot different than what I expected, and I actually find this image to be rather pleasing. Calming, even. A good way to start the day.

And some days that’s all you need.