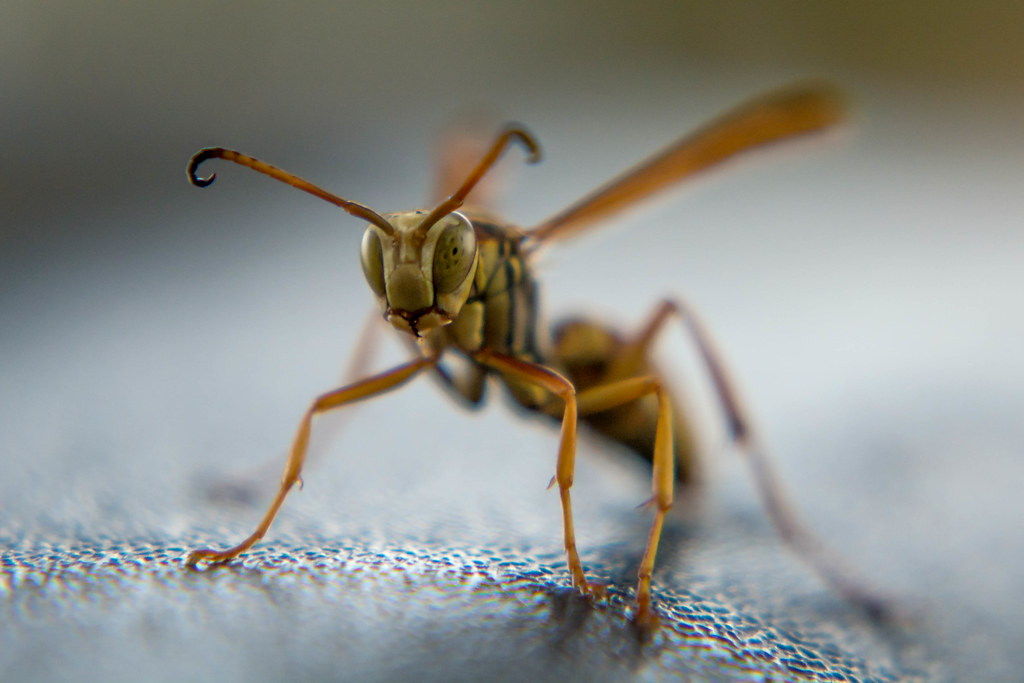 Sometimes I really wish I had a proper macro lens. There aren’t too many occasions on which it would be useful, but this was definitely one of them. I made do with my usual 50mm lens and close-up filters, but good gravy I think an actual macro lens would have been so much better! Maybe someday :) In the meantime I have fun with my cheapo close-up filters and I do enjoy getting shots like this, if nothing else for the sheer challenge of it all.

The sun was going down one evening early in November and I had just come from inside the house with a garbage bag full of trash that was bound for the bin, but I stopped short when I saw this wasp sitting on the black lid. He was just sort of minding his own business and didn’t seem interested in stinging anyone, so I ran inside and grabbed my D7100, which already had my 50mm lens attached, screwed on a +10 filter, and ran back (though tiptoeing the last few yards) to see if I could get a shot of this little bug before he flew away. I didn’t know how long I had to take the shot so I tried to act quickly, and thankfully the results were decent enough when it was all over.

I don’t often use my +10 filter because the depth of field is just too unwieldy, but I knew that for a shot like this it was going to give me a lot better results than a +4 filter. I also don’t like using wide apertures with a +10 filter because, again, depth of field. But because there wasn’t much sunlight left, and because I was shooting with my D7100 and not my D750 (and, hence, couldn’t raise the ISO very much without the picture becoming mired in digital noise) I ended up shooting at f/4. In fact, I shot this scene in Manual as opposed to Aperture Priority because I wanted to make sure I was getting the precise results I was hoping for. My final exposure settings were 50mm, f/4, 1/125 second, ISO 400, a little energon, and a lot of luck.

I used Live View as well, which is super unwieldy on the D7100, but it was the only way I could be sure of getting anything close to in focus. I knew I wanted the eye to be as sharp as possible so that was my main goal, but this was made even more tricky since the wasp wouldn’t hold still and kept on crawling, slowly, around the textured trash can lid. I wish the lighting would have been just a bit better but in general I’m pretty happy with how this turned out, and it was fun to get the chance to use my (very limited) macro gear for something a bit different than I usually shoot.