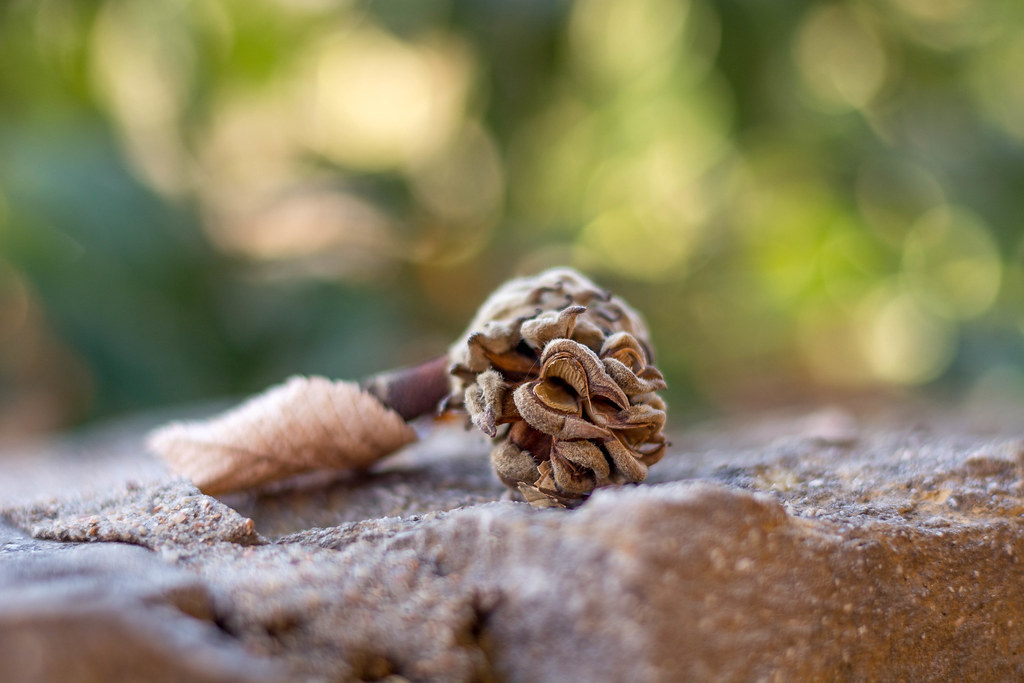 Just as I don’t usually take photos with specific days or times of the year in mind for posting, I also don’t usually take them with the intention of showing them together as a specific group. This changes from time to time, like when I did my series of sunset images last summer, but for the most part I just post pictures here on the blog in no particular order and with no real rhyme or reason. However, when I shot this image I thought it would serve well as somewhat of a companion piece to last week’s photo of a magnolia seed pod.

As often happens with my Weekly Fifty photos I was out on a short walk around Theta Pond on campus and I saw this husk resting on a stone ledge, having long since served its purpose of creating seeds for eventual dissemination. Magnolia flowers, and their resulting central pods, are really a sight to behold but I don’t often think of these remnants as being photogenic or noteworthy at all. However something about this rather unremarkable scene gave me pause, and I’m glad I stopped to investigate.

I had my D7100 and 50mm lens with me at the time, and after using that thing combination for over six years I think my only real complaint, in terms of daily photographic use, is that the rear screen doesn’t flip out. Most modern cameras offer this feature and while Nikon DSLRs aren’t exactly known for their prowess with Live View (that’s what their new mirrorless Z system is for!) it is useful to compose with the rear screen from time to time. And when that happens, a flip-out screen sure would be nice. Such was not the case here so I made do with what I had, and despite having to contort myself at kind of an awkward angle I think I got a pretty good shot nonetheless.

I shot this at f/1.8 because I wanted maximum background blur, and really I think that’s the standout feature of this picture: not the subject, but the background. It’s almost like the purpose of the subject is specifically to draw your eye to the greenery behind it, and that’s something I don’t often think about when composing photos. I tried a few shots at f/2.8 but it just didn’t give me that silky smooth look I was going for (unlike last week when I specifically chose f/2.8) and I actually did end up moving the seed pod just a bit so I could get that brown curled-up leaf in the shot as well.