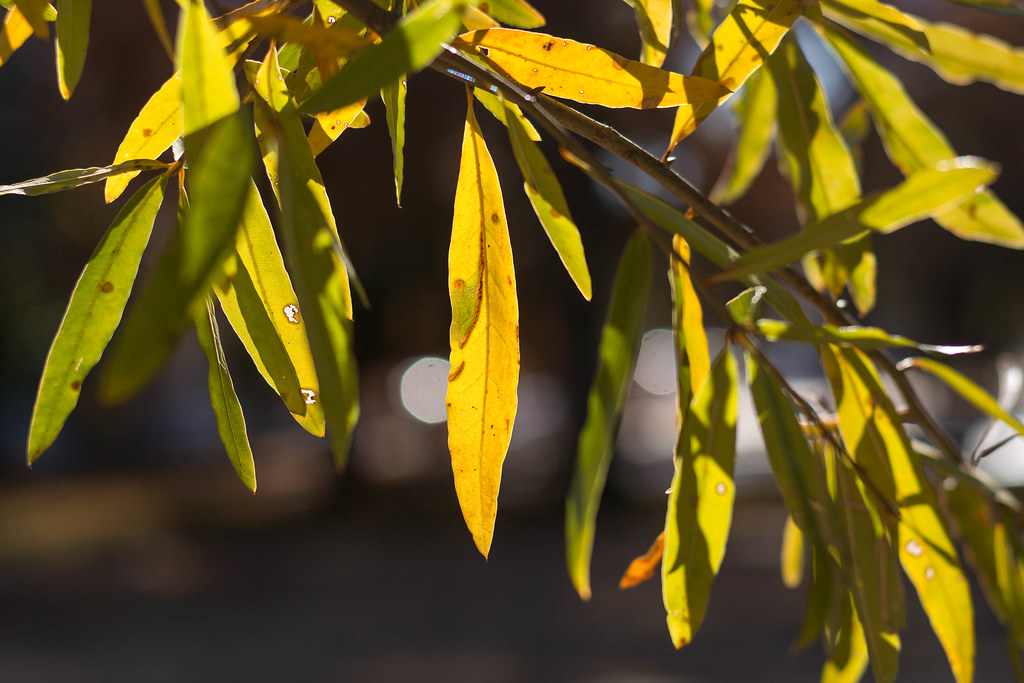 I don’t like taking pictures that are basically carbon copies of earlier photos, but I do enjoy paying homage to previous photos by way of making images that are inspired by their forebears. The photographic pronoun to a visual antecedent, if you will. When I shot this picture (about three minutes before last week’s photo, as a matter of fact) I specifically had another shot on my mind which I took almost exactly three years earlier. What attracted me to the initial image from November 2016 was a sense of color and backlighting, and I liked the contrasting colors too. So when I came across a similar scene near Theta Pond I wanted to use some of my lessons I learned taking the earlier photo in what was, hopefully, some new and interesting ways.

First of all, the subject. The original had a wide blade of yellow grass slicing vertically through the image, and when I saw a yellow leaf doing kind of the same thing I thought it would make for a similarly interesting picture. The original image also has a heavy mix of subject and background colors, and as such I wanted the background to play a key role here as well. I stood on my tiptoes to get this shot, with the goal of getting the balls of light (which was sunlight being reflected off of car headlights on University Avenue) in just the right spot so as to complement the leaves. I don’t know that it entirely worked, and I did end up with one image that I think is better in terms of subject-and-background composition, but in that one the leaf was just a little out of focus. So in the Rejected pile it goes!

I wouldn’t say that this picture is better than the original, and in some ways I actually prefer the 2016 incarnation, but I was making a clear attempt to take a picture based on lessons learned from three years prior. Sometimes the things I do when taking a picture are quite unintentional, or perhaps more along the lines of muscle memory, but other times I specifically try to incorporate things I have picked up along the way. If it works, cool. If not, no big deal. I still got to use my camera, and that’s always a win :)