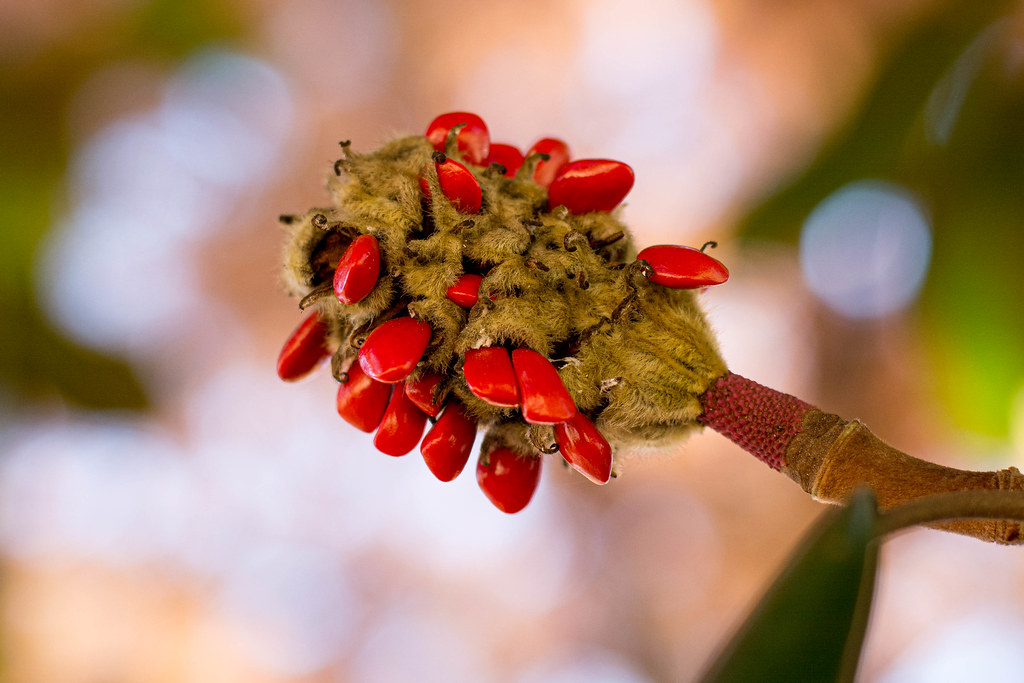 In looking through some of my photos from Fall 2019 I realized I didn’t have too many of one of my favorite subjects, that of magnolia seed pods as they begin to constrict and force out the beautiful red seeds that lie within. I’ve posted several images of these seed pods over the years here on Weekly Fifty and maybe that’s why I wasn’t all that interested in taking more pictures of the same subject again. It felt like a been-there-done-that scenario, and I don’t want to shoot the same pictures of the same things over and over.

When I went out for a short walk around Theta Pond in mid November I certainly didn’t plan on taking a picture of yet another magnolia seed pod. In fact, most of the trees had long since shed their seeds which eliminated even the opportunity of getting the same type of picture I had gotten many times before. I had my D7100 and 50mm lens just in case I saw something interesting, and after some rather boring photos of geese wandering around I found this one single seed pod that had not yet fallen to the ground, and realized that I actually could make something interesting and new from a very familiar subject.

The thing I realized I could do to make this picture a bit more compelling, as opposed to just a bunch of red seeds sticking out of a brown husk, was to adjust my position (as well as the aperture of my lens) such that the background would be more than just blue sky or green leaves. Far above this seed was a cypress tree spreading a beautiful canopy of brown feathers across the sky, and I realized that was the key to the whole operation.

This seed pod was about ten feet in the air which meant I had to use Live View, and on a D7100 (remember, this camera came out in 2013) that’s not exactly a task that requires minimal patience. It’s slow, clunky, and choppy and forget about using a zoomed-in view to check focus. As such I decided to shoot at f/2.8 in order to get a little more room for error in terms of depth of field, which turned out to be a good thing because the shots at f/1.8 had a background that was just a giant brown blurry mess. It wasn’t pleasing to look at in the least, whereas the bokeh was rendered much more beautifully at f/2.8.

See those white parts on the left–the balls of blurry light that seem as if they frame the seed pod? Yeah, that was completely intentional on my part. After about a dozen shots I discovered that I could position myself in such a way as to make the seed pod show up between those highlights, as well as the one on the right, and the result is actually quite similar to my mockingbird picture from last week. A good picture isn’t just about the subject, but the other elements in the frame that serve to augment the image. That’s what I tried to do here and I think it worked pretty well.