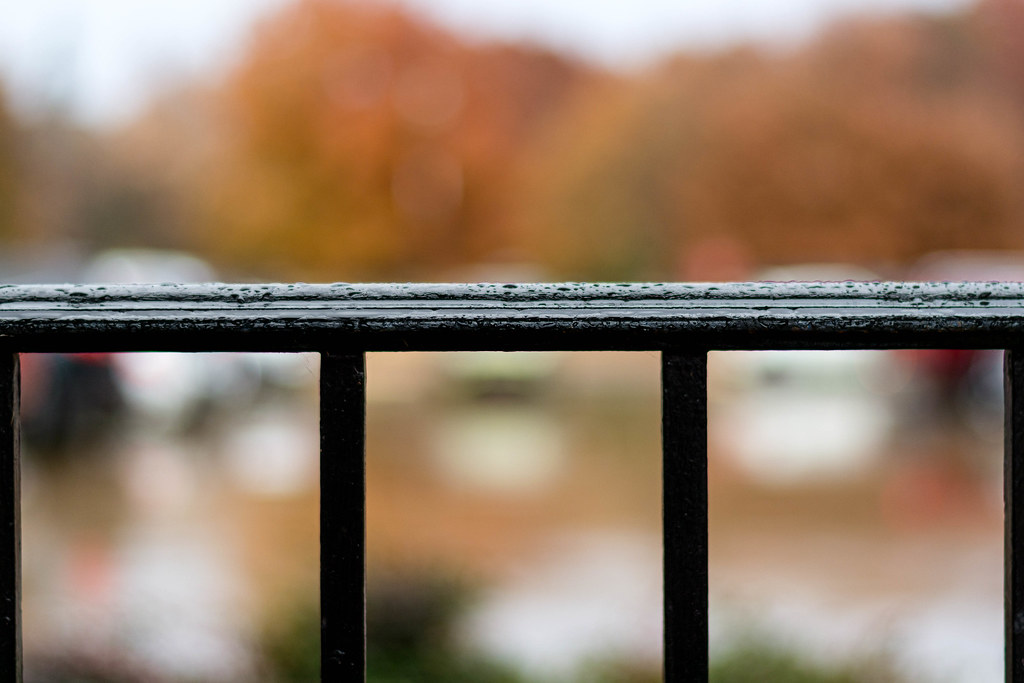 So here’s something you might not know about me…I get really nervous when I go out and take pictures in public. It’s one reason you rarely see photos of people here on the blog, and it’s something I’ve been trying for years to overcome to varying degrees of success. I just feel kind of self-conscious when I’m using my DSLR (or even my phone camera) in a public setting, as if everyone is watching me and wondering why I’m taking pictures of such boring, mundane objects. And I really don’t feel comfortable taking photos of people public parks or gathering areas. It feels like I’m intruding on their own personal space, even if they’re just in the background of a picture I happen to be taking and not actually the subject of my photo at all.

I shot this picture on a rainy afternoon after I got off work and was waiting for my wife to meet me outside her office. There’s a covered walkway between two buildings on campus where we meet up after work sometimes, and she told me it would be just a few minutes so I grabbed my D7100 and 50mm lens from my bag and looked around for something to shoot. After a few seconds I found it, right in front of me: the railing at the edge of the walkway. I thought the rain on the black paint made an interesting texture, and the autumn colors beyond the railing were a neat mix of greens and oranges that I really liked.

I set my exposure (f/1.8, 1/250 second, Auto-ISO value of 180) and snapped a single photo…and heard a door open just to my left followed by footsteps heading my way. Normally I would have taken a few more pictures, adjusting the aperture to see what results I could get at f/2.8 or even f/4, and maybe changed my angle of view, but as soon as another person entered my peripheral vision I immediately put down my camera and stood up. I went from feeling creative to feeling awkward, even though to the other person I was probably not on their attention radar one iota. He probably didn’t care one bit that there was a person taking pictures of a railing. He almost certainly had other things on his mind, and some dude with a camera wasn’t even close to registering on the scale of things that mattered.

And yet…I still felt the need to stop everything for the sake of…what? I don’t honestly know. This doesn’t have anything to do with the picture, but I thought I’d share it here and I’m wondering if any of you feel a similar way.

As for the photo, I like that it almost feels like two pictures. First, the obvious: a rainy railing overlooking an autumn scene. But it also looks like the panes of a frosted glass window, which is due to the huge aperture (and, thus, very shallow depth of fiend) and it’s a look I didn’t anticipate when I took the photo but in hindsight I think is pretty cool.