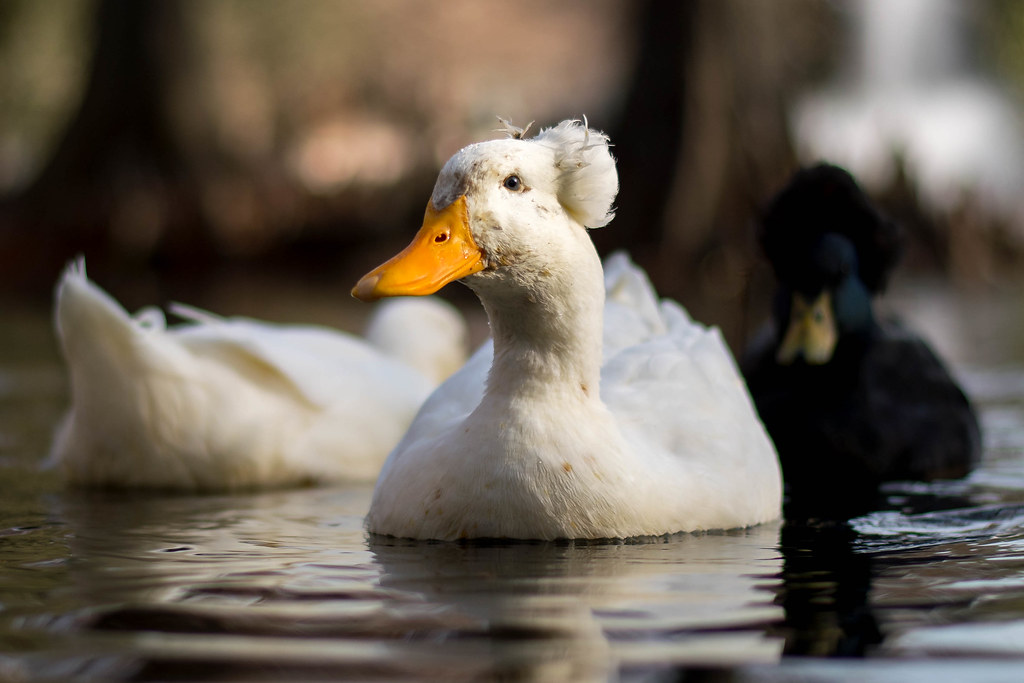 Like last week’s photo, I shot this when I was out for a walk at Theta Pond on a warm day in December. And like last week’s photo this one is also a duck, though in a slightly different context. I shot this with the same camera/lens combination (Nikon D500, 50mm f/1.8) and, as with last week’s photo, I have the camera’s Live View to thank for it. But before I get to that, look at the water in the foreground. In order to get this shot I held my camera about an inch off the surface of the water which wasn’t super risky since there wasn’t much in the way of wind or waves, but it still was just a little nerve-wracking. Let’s just say I made sure to use both hands and a sturdy wrist strap.

One thing about Nikon DSLRs and Live View is that they’re just not great when it comes to continuous autofocus tracking. They’re not even that great at single-point autofocus, though I do appreciate that on this D500 you can at least tap the screen to set your focus area. For this shot I set the focus are and then continually pressed the back button to reset focus as the duck swam around, and basically just sat there taking a bunch of photos for a minute until the duck turned around to go to the other side of the pond. I wasn’t all that optimistic that any shots would be usable, but this one turned out great not just from a compositional standpoint but also because it’s super sharp and in focus. Most of my other shots were either not quite focused or the duck was in a weird position. But this one…well, this one worked :)

I have noticed that I tend to go in waves, so to speak, with photos at Theta Pond. I’ll walk over there and be enamored of the foliage and fauna one day and return to take some pictures, and then weeks will go by without me giving it a second thought. Even though it still feels like cheating to walk a few hundred yards from my office to get pictures of animals that are there pretty much year-round, it is something I enjoy doing and I try to tell myself that it’s OK to repeat the same type of image. Every picture is unique even if the subjects are the same, and as long as I enjoy the process and learn something from it then what’s the harm in doing so?