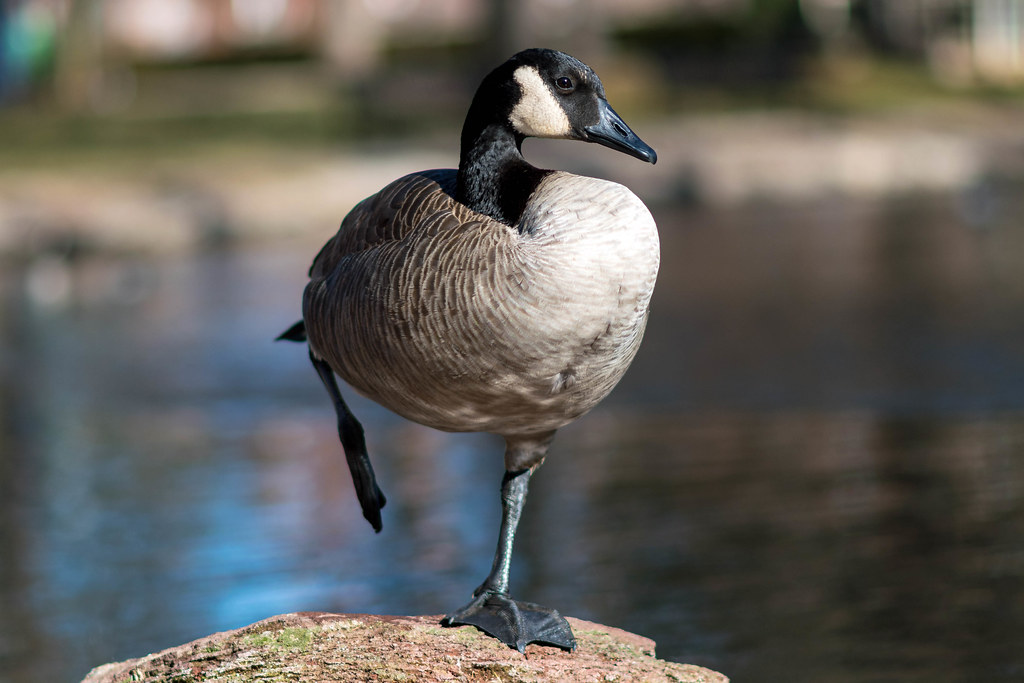 I know what you’re probably thinking right now: what’s up with yet another picture of a goose? In truth I’m not exactly sure why I’ve had so many shots of birds this year, but for some reason I’m enjoying taking pictures like this. And in looking back at my Flickr library I don’t yet have a picture of a goose or duck standing one-footed on a rock…so there you go :)

When I left for work the morning I took this photo I grabbed my D500 which happened to have my 85mm f/1.8 lens attached, so I went with that just in case I came across any photographic situations. As often happens, at one point during the day I went out for a walk near Theta Pond and brought my camera with me only to find a small gaggle of geese hanging out on the west side of the water. This one in particular really caught my eye, partially because of how it (he?) was standing but also because of the lighting. The sun was behind me and cast a nice warm glow over the whole bird, with only a very small shadow just to the left of his (might as well use the masculine pronoun for easier writing) neck. He was preening his feathers constantly which made it really tricky to get a shot, especially with other geese swimming behind him, but I was able to get this single frame where he was perched with one foot and eyeing me somewhat skeptically.

As you might be able to tell I had to be low to the ground to shoot this, and as such it was nice to have my D500 since the rear screen flips out and the focusing in Live View is so much faster than my other cameras. I also had to consider the aperture, since depth of field is so thin on my 85mm lens but I really wanted to blur the background and isolate the subject. I figured I might as well try though, and opened the lens all the way to f/1.8 despite the fact that I knew I was likely to miss focus slightly or get some purple fringing as a result.

Turns out I nailed the focus just fine, and as for the fringing it’s not really a big deal. You can see just a bit of it along the bird’s back, but it’s not enough to detract from the image. Believe me when I say that a few seconds later this entire scene changed: more birds, different pose, and changing lighting conditions too. It’s fun to go for a shot like this and have it really work out :)