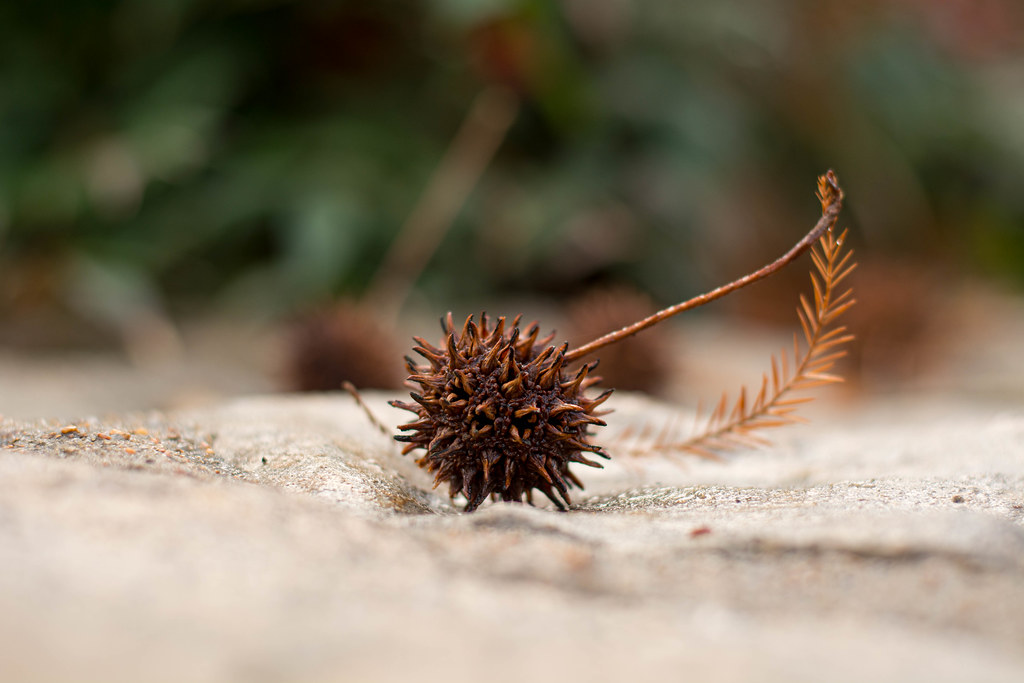 This photo is similar in many ways to one that I shared on January 15. So similar, in fact, that it almost seems like a cop-out to put it here because it would seem there just isn’t much variation between the two. So why post it? Because it’s not about the subject, it’s about the lighting.

The first image was shot on a sunny afternoon in mid November which lit the whole scene in a warm glow while the bushes behind the magnolia seed pod had pockets of light shining through. It was lively and dynamic, despite the subject being most certainly deceased. This week’s photo is similar but the conditions in which it was shot were much different, which adds some subtle but important alterations to the image as a whole.

First and most importantly, I shot this on a cloudy day after a morning of light rain. That led to drastically different lighting conditions, and you might notice that the bushes behind the gumball are much darker than the magnolia seed. The other key change, and the one that I like the most, is that all the surfaces are wet. The rocks, the gumball, even the cypress leaf all have a shine to them that adds a sense of life and story to the picture.

To get this shot I held my D7100 with 50mm lens just below the rocky ledge and shot using Live View so I didn’t have to contort my body in strange ways. I took a few images at f/1.8 but shot this one at f/2.4 to get a bit more leeway in terms of depth of field, and I think the results turned out just fine. True the f/1.8 version had a blurrier background but at the cost of a less-defined subject, and that was a tradeoff I didn’t really want to make. Also, I should note that just because I’ve been shooting a lot of images with my new D500 doesn’t mean my old gear is useless. Quite the contrary! I still get plenty of use out of the old D7100, and if anything my D500 has continued to illustrate just how capable that old camera really is :)