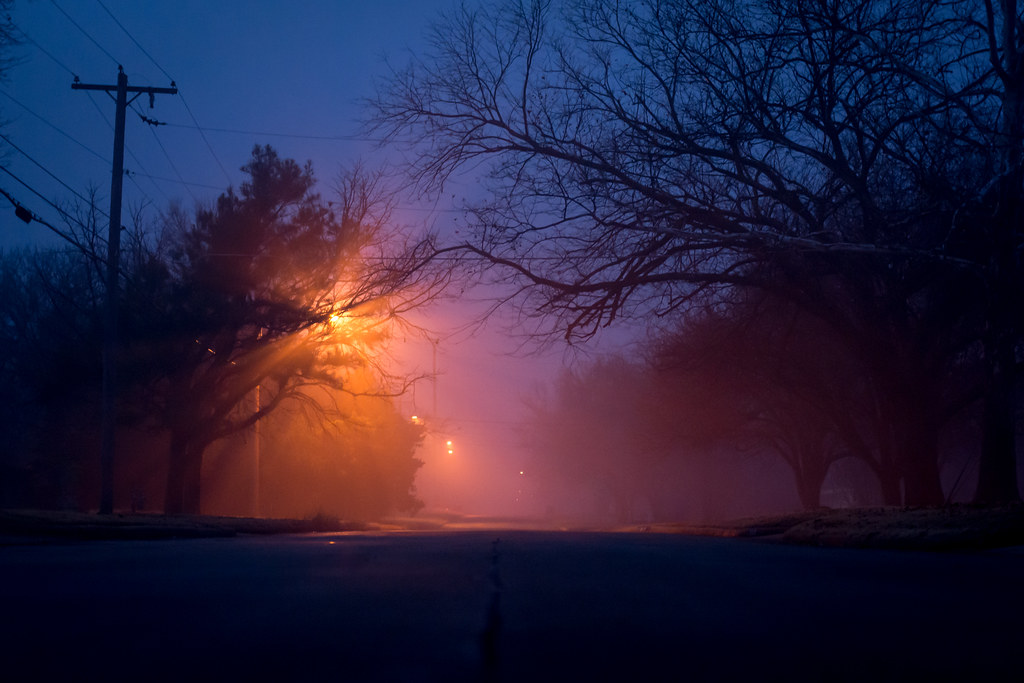 This is the one that almost got away.

As I left for work on a mild January morning a few months ago I noticed as soon as I opened the garage door that something wasn’t quite right. The whole neighborhood was shrouded in a thick fog, the kind that we only get a few times a year. I ran inside and told my two boys to come here, quick, and don’t worry about your shoes! They raced outside and immediately saw and felt what I was talking about. There’s a certain stillness unique to foggy mornings, where you can literally feel the air like a thin wet blanket as you move around beneath the trees. I had to get going so we didn’t spend too much time dwelling on it, but I was glad I got to share that quick moment with my kids before I left for the day.

A few minutes later I was driving south towards campus when I came across the scene you see above. It reminded me of the train scene in The Assassination of Jesse James by the Coward Robert Ford, shot by the great Roger Deakins whose use of light and shadow in cinema is the stuff of legend. As I drove down the road, the light coming through the tree branches was almost breathtaking and it really felt like I was in the middle of a movie.

So what did I do? I thought about taking a picture, and then just kept on driving. I don’t know why, but it seemed to me in the moment that there wouldn’t be any way that I could actually capture a picture of the scene I saw before me, so why even bother trying?

And that’s when I stopped, turned around, and went back to get the shot.

Since I got my new Nikon D500 I’ve been keeping my D7100 and 50mm lens with me a little more often when I go to work, and thank the Lord I had it with me in my bag on this particular morning. I pulled on to a side street, grabbed the camera, ran out to the middle of the road, and snapped a few pictures. I didn’t have much time to plan or even think, but I knew I would need a large aperture to let in enough light for a fast shutter speed. I knew those tree branches had to be sharp. I shot a few pictures at f/1.8 and checked the LCD screen, and then quickly stopped down to f/2.8 in order to get the picture a little sharper since the trees in the foreground were just a little too blurry at such a wide aperture. I also moved my camera position, and instead of holding it I literally set it down on the road and pointed it upwards so I could get a more interesting point of view. I back-button focused on the street light, put the camera in continuous high-speed mode, and fired off about ten shots until the internal buffer filled up.

Why take a series of continuous shots? Because I’ve realized that when dealing with slow shutter speeds on a camera without a tripod or lens or sensor stabilization, your best chance at getting a sharp picture is to just take a boat-load of pictures :)

I shot this, like most of my pictures, in Aperture Priority with Auto-ISO and the resulting exposure of 1/60 second and ISO 3200 worked just fine. A little cropping and some other tweaks in Lightroom resulted in the picture you see here, which I think turned out beautifully. I kind of wish the power lines weren’t there but I didn’t want to go to the trouble of removing them in Photoshop, and I think they do help sell the idea that this is in an urban setting along with the street lights.

I’m so glad I turned around to get the shot.