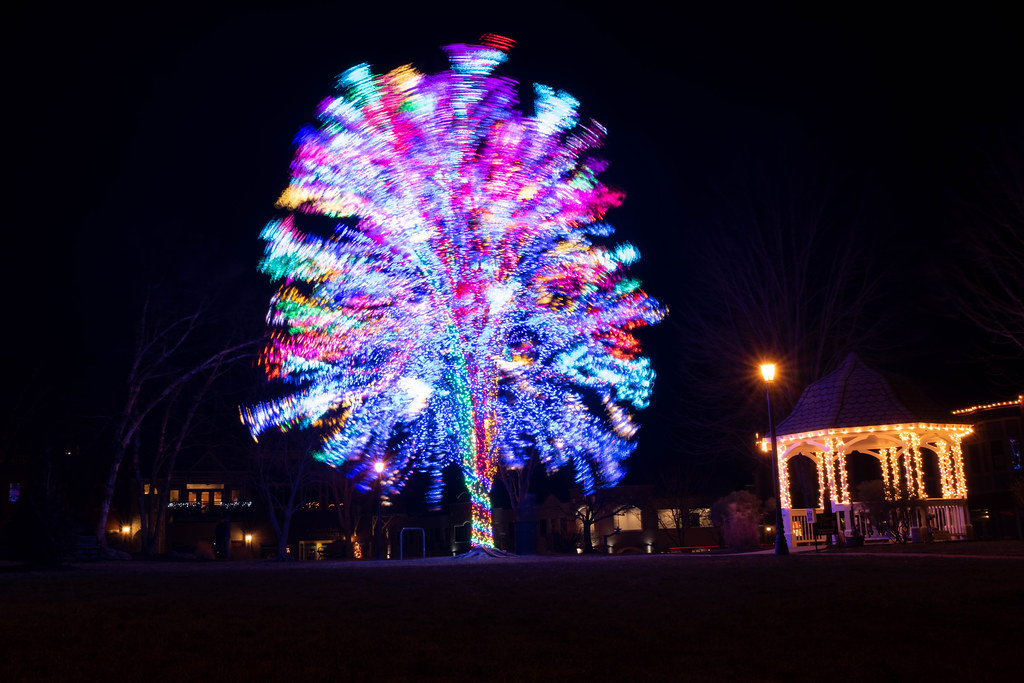 Almost exactly one year ago I shared a photo of something called the Magic Tree. It’s in Columbia, Missouri, and we like to go see it (there’s actually two of them) every year when we visit my wife’s family over Christmas. The photo I shared last year was shot with my Fuji X100F, and it’s actually the same tree as this year’s image, but the two pictures could be seen as two extreme ends of the same spectrum. One one end you have last year’s photo which was a close-up of a single green light with a thousand other bulbs scattered throughout the background. When we revisited the same location over Christmas a few months ago I wanted to go way to the other end of the continuum and capture an image of the entire tree. But in a different way than you might expect.

As we were walking around the tree it was about 30 degrees and windy, and my wife’s mother commented that it would be fun to get a video clip of the glowing branches swaying in the wind. I thought about this for a bit and realized that I could do something like it, but with a single image. I could use a long exposure to capture a sense of motion without taking any video at all. The difficult part (aside from waiting for a particularly strong gust of wind) was limiting the amount of light entering the camera to get an exposure long enough to capture a great deal of movement.

Enter the Fuji X100F, to the rescue once again.

Even after setting my ISO to 200 and my aperture to f/16, I was only getting a shutter speed of around 10 seconds for a properly-exposed image, which was much shorter than I wanted. Even though I shot this in RAW which meant I had a lot of editing flexibility in Lightroom I didn’t want to blow out the highlights, and even exposing for 15 seconds was far too much. Then I remembered that my X100F had an ideal solution: the built-in ND filter. I don’t use it very often, but good gravy it sure is handy in a pinch. The 3-stop ND filter gave me an exposure time of 30 seconds, which was even just a bit dimmer than I wanted but plenty to get the look I was aiming for.

The result is an interesting effect: many elements in the picture are static: the gazebo, the street light, the background lights, and the trunk of the tree. But the higher up the trunk you look the more you see the result of winds blowing through the branches, and it almost makes you dizzy to look at it. You might also notice that the horizon is slightly off-kilter, which was due to my tripod not being quite level, and while I would normally fix this in Lightroom I decided to leave it just as it was shot in order to give the viewer a small sense of unease. I really like how this turned out, and I hope you are able to go see these lights if you ever get the chance.